Home » Articles » Who Do You Think You Are

Who Do You Think You Are 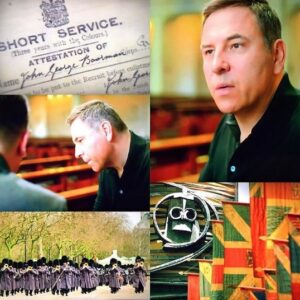 Comedian Actor and Author David Walliams recently visited the archives to look into his family history. David is better known for Little Britain, The Boy in the dress (book and stage Musical) and BGT Britain Got Talent. Made some wonderful findings, it is noteworthy that David’s family had traveled, at one time some were living in Salisbury, Warminster and Portsmouth.

Very interesting to both Directors of Memorial at Peninsula ltd (Both are Hampshire Ambassadors) Noteworthy also that one of the places that David’s ancestors have lived was indeed a Royal Green Jacket posting (Warminster).

David went on to discover that his Great Grandfather John George Boorman, who had served in the Grenadier Guards had indeed served in WWI.

His Great Grandfather has suffered shell shock (now known as Post Traumatic Stress Disorder (PTSD) this is a very poignant program at this time of year, as we approach Armistice Day.

This years’ service of remembrance at the Cenotaph will not go ahead due to the restrictions of safe keeping due to the COVID-19 pandemic, this does not lesson our thoughts of those that have served in many a campaign. David also went on to find out that his ancestors were showmen and this shows the Apple does not fall far from the tree.

MEMORIAL AT PENINSULA LTD is respectful in remembering all those who served.

All gave some, some gave all.

At the going down of the Sun, We shall remember them.

The producers of Who Do You Think You Are? (BBC One) must live in morbid fear that a celebrity boasts a family tree that yields only the most meagre of fruits. Occasionally there is a spectacular ancestral windfall. Danny Dyer’s distant but direct link down from medieval monarch Edward III, for example. Or Naomie Harris’s mixed heritage including slaves and slave owners.

But imagine if some colourful public figure’s antecedents were exclusively dull, or, worse, linked to some deeply uncool figure, such as Nigel Farage. By the way, it’d actually be fun for Farage to explore his immigrant forebears, but I’m guessing his chemistry with the BBC doesn’t encourage the commission.

Anyway, David Walliams does have a decent enough backstory, and a moving one. One great-grandad was a strapping lad with some resemblance to Walliams, and served with the Grenadier Guards in the Great War. John George Boorman survived the Somme and Ypres, but was so severely shellshocked (what we now know as PTSD) that he spent the rest of his days, until his death in 1962, in a “lunatic asylum”, seeing little of his children. The pretty pictures he painted in the art therapy classes gave no hint to his mental trauma.

The other remarkable great-grandfather was rendered blind after failed surgery for cataracts, but wound up as a “travelling entertainer”, running fairground rides with his wife and kids. Early in his career on a barrel organ, he was prosecuted for using his kids to beg, but went on to become fairly prosperous, though still caravan-based.

Surviving photos suggest a dapper sort of chap always ready with a quip and a strong ambition, not so very different to Walliams. Every entertainer in every age, after all, has to be self-made, though; there are no hereditary peak-time slots on Saturday night telly.

The general impression of Walliams’ ancestry is of an entertaining, lively sort of bunch – traits which charmingly, in the sequences with his mum Kathleen, still seem to be going strong. Walliams himself though is not an especially likeable man. He seems permanently underwhelmed, and a bit off-hand with some of the professional historians who’ve done all the heavy work in the archives, tracking down vivid details and revealing little glimpses of his distant relatives. Maybe that impression of him is just down to Walliams’ manner and his sense of humour, which is dry to the point of desiccation. I’m not sure I’d be entirely delighted to find Walliams popping up in my family tree.

Credited to The Independent and Who Do You Think You Are.