THE SHOT AT DAWN DVD

By Memorial At Peninsula Ltd© 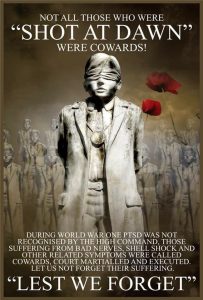 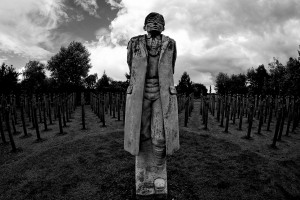 YOU TIED MY HANDS, BLIND FOLDED ME.

BOUND ME TIGHT, AS I TREMBLED WITH FRIGHT.

IT WAS THEN THAT I HEARD, A COMFORTING WORD,

FROM THE PADRE, WHO KNELT BY MY SIDE.

HE BID ME FAREWELL ON MY JOURNEY THROUGH HELL.

THE LAST WORD I HEARD WAS AMEN.

ALL YOU DID WAS PUT BULLET’S IN ME.

Shot at Dawn Poem and Painting by Philip Pickford

Shot at Dawn DVD ( ALL GAVE SOME – SOME GAVE ALL )

This DVD was made by Memorial At Peninsula Ltd 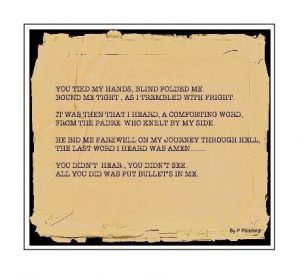 SHOT AT DAWN Between the years of 1914 and 1920, more than 3,000 British Soldiers were sentenced to death by courts martial for desertion, cowardice, striking an officer, disobedience, falling asleep on duty or casting away arms. Saying that, only 11 per cent of the sentences were carried out.

In total 346 where shot at dawn and 1 hung = 347 including some who committed murder, 306 where pardoned by the Government many many years later. ( yet there are 307 posts at The NMA) ?

Roughly 90% of cases, the sentence was commuted to hard labour or penal servitude.

Medical evidence apparently showing that many were suffering from shell-shock, this was also submitted to the courts, but was not recognized and misinterpreted. Most hearings lasting no more than 20 minutes.

Transcripts made public 75 years on after the events suggest that some of the men were underage. Others appeared to have wandered away from the battlefield in states of extreme distress and confusion, yet they were charged with desertion. When the suppressed documents relating to these courts martial were released, they showed that these men were demonstrably shell-shocked.”

Contrary to popular belief, they were not all denied natural justice….’Rough justice’ it may have been, but justice nevertheless. They were given access to legal representation but not the right of appeal, as the Field Marshal’s decision was absolute. Because ‘Shell- Shock was not recognized back then, most of them were not given proper medical examinations and so their conditions were over-looked.

The function of the threat of executions was to a intimidate and frighten soldiers in the battlefield….Risk the possibility of a bullet in battle or certain death if you don’t do your duty.

The standard soldier in the trenches would be suffering from chronic insomnia and anxiety attacks. He would be wet and cold in wind-chill factors that dragged temperatures as low as minus -18. This alone was enough to drive anyone crazy.

To say that all these men who were shot were bad and deserved their punishment is to ignore all these factors. Most just couldn’t take any more.

By 1930, Parliament had introduced legislation banning the death sentence for the offences for which the 306 were shot. None would be shot today.

Remarkably, most of those shot in the 1914-18 war were volunteer soldiers rather than conscripts and, perhaps unsurprisingly considering what was happening in their homeland, Irish soldiers were shot with proportionately more frequency than those of other regiments.

Among other principles of justice, the presumption of innocence was paid no more than lip service by many British courts martial. Some believe that the British Army was far more likely to shoot a working class man than an officer, and broadly speaking, this was true.

They were finally ‘pardoned’ in the August of 2006 under section 359 of the British Army Act.

In it is shown a list of the ‘original offences’ that soldiers could be tried and executed for :-

(1)This section applies in relation to any person who was executed for a relevant offence committed during the period beginning on the 4th August 1914 and ending with the 11th November 1918.

(4)This section does not (a) affect any conviction or sentence; (b) give rise to any right, entitlement or liability; or (c) affect the prerogative of mercy.

(5) Any reference in this section to a provision of the Army Act 1881 (c. 58) includes a reference to that provision as applied by any enactment, wherever enacted.

The first soldier to be Shot at Dawn was Thomas Highgate

Good books too read are

By Julian Putkowski and Julian Sykes

by firing squads in WWI

The posts are in the Nation Memorial Arboretum at Alrewas