Our first mission was completed in 2015, this was the installation of a Memorial Chair which was installed in the former barracks in Winchester and was the ancestral home of the Green Jackets. The former barracks now houses Military Museums, one of which is the Regimental Museum of the Regiment, formerly known as The Royal Green Jackets, which has now been succeeded by The Rifles. The installation of the Memorial chair is at the site of the Museum of, The Rifles and former Regiment of The Royal Green Jackets and their antecedents.

Both are significant in that one chair is a Memorial chair, thus remembering all that have given all, from the present Regiment, the former Regiment and their Antecedents, The Family of Green, The Rifles and The Royal Green Jackets.

Sadly in 1986, the barracks closed its’ gates as a Military home to the service personnel of The Royal Green Jackets; the Soldiers marched for the last time through the gates, to a barracks outside of Winchester which was to be a shared residence; with other Regiments.

From 1958 until 2007 the Green Jackets and latterly named The Royal Green Jackets have sustained losses both on home ground and in theatre (operations worldwide).

172 families have borne their losses without ceremony and with dignity.

For those that are left behind their memories and the knowledge that their loved ones died proud to be counted as a member of the family of the Green Jackets offer comfort.

The Rifles, which is made up of some former service personnel from the disbanded regiment, The Royal Green Jackets and other Regiments, have also be mentioned on the lasting tribute, they too have also sustained losses, and casualties, since the formation of the successor Regiment.

It was hoped that this lasting tribute when in situate, would lend to raising awareness of all of our forefathers associations and sister regiments associations and in so doing, help raise funds for care for casualties, which is to help Riflemen and their dependants. Once a Rifleman always a Rifleman, one extended family.

Although each Service Man or Woman is given a Regimental number they are individuals who have chosen to serve their Sovereign and Country, they are someone’s Son, Daughter, Brother, Sister, Mother, Father, Friend, Comrade a Kin of the Regiment and an accepted member of Her Majesty’s Armed forces.

Service personnel that have just become adults with their whole life ahead of them have died in baron land, having left their home wishing to return…

The mission (aim and objective) is to erect a lasting tribute which will showcase the illustrious Regiments of times gone past, which have all amalgamated to form the Regiment of The Royal Green Jackets, and whilst doing so will also showcase the extended family of green, to include their Successors The RIFLES.

The lasting tribute at Peninsula Barracks is generic.

The fallen, are named and remembered on the wall of remembrance at the National Arboretum in Staffordshire.
The aim was to bring to the ancestral home of The Royal Green Jackets, a tribute which will serve as a showcase of history and recognition of the ties between the City of Winchester and the Regiment, our forefathers and Sister regiments, the greater family of green.

For those that came home and continued to serve they were met by the Government’s decision to disband the Regiment.

Her Majesty the Queen Elizabeth II, the Regiment Colonel in Chief also met the decision with sadness.

The lasting tribute will be a quiet place of reflection for many, a place where some will reflect and honour their brothers, also a way of recognizing the first mechanized Infantry Regiment that this Country had, a step back into history, whilst remembering forefathers and their Regiments.

This tribute will be an act of remembrance for so many, a path to heal the bereaved, a step forward into the history of the Regiment. It further cements the ties between the City of Winchester and the Regiments Veterans.

It was the aim to erect the lasting tribute in readiness for the 2014 anniversary of the First World War, thus remembering our forefathers.
There are further projects/ missions which will be clear evidence of the Military Covenant, the bringing together of Military and Civilians within the community. A lot of the greater community is made up of Military Veterans who have set down roots in the community.

The overall mission is to remember, pay respects and commemorate the service of the Armed forces, and in so doing highlight Military History, and the achievements of those that went into theatre to bring forward peace, in a hearts and minds offensive. These projects will be Country wide and will also highlight others who need help and welfare support.

Memorial At Peninsula, need your support to achieve this, in so doing we will use funds raised through kind donations to maintain the chairs and other projects. We aim to highlight charities associated with our projects and in so doing will keep the public informed at the time of individual projects of others that will benefit as a result of our installations. Working back to back with other Military charities, benefiting their charities too.

We aim to put Veterans and service on the Map Countrywide.

Furthermore the Directors will also promote the County of Hampshire, as Ambassadors of the County, and in so doing highlight the County and its’ vast Military History through established and establishing transcripts on our website, and through lectures and promotion and further installations.

The group which is made up of Veterans and family dependants is solely funded and manned by volunteers; it is reliant on the support of the public. 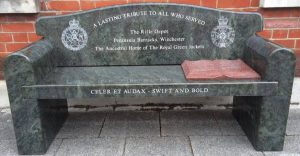 But for them you have to day.

They gave for your today.

They shall grow not old.

We shall remember them.

By the Directors of Memorial At Peninsula Ltd.

Please donate to our cause, this is a call to all who served