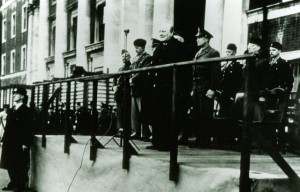 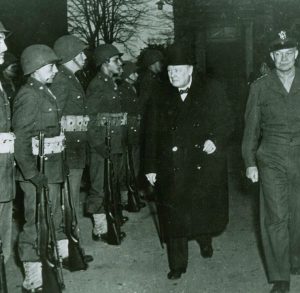 The Rifle Depot housed the 60th Infantry Regiment of the 9th (US) Infantry Division, who were preparing to take part in the 1944 D Day Landings in Normandy (Operation Over Lord). The Rifle Brigade recruits were trained at near York during this period. 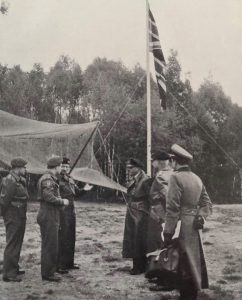 The surrender of German forces

Field Marshal Sir Bernard Montgomery receiving the surrender of the German forces at his tactical Headquarters,

This was the beginning of the end as the War was not officially over. 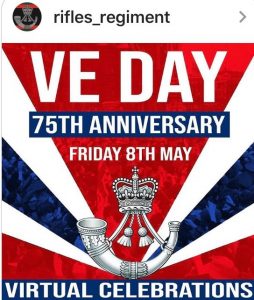 The Rifles Regiment are joining the Royal British Legion

to mark the 75th Anniversary of V E Day from home with a Tea Party.

Victory in Europe day, May 8th 1945, was a time of great celebration for Britain; as Churchill walked to a Service of Thanksgiving at St Margaret’s, Westminster, he was engulfed by an ecstatic, cheering crowd, all wanting to shake his hand and pour out their relief and gratitude. Even the two princesses, both teenagers at the time, got in on the act according to the Reader’s Digest’s ‘The World at Arms’. For once in a way their father the King allowed them to venture out mingle with the crowds, and wrote later in his diary, ‘Poor darlings, they have never had any fun yet.’

However, there were those who found it hard to get into the swing of things. Many young men and women would not be coming home, among them the 383,786 military dead from Britain, not to mention over 67,000 citizens on the Home Front – and that was without accounting for the Commonwealth casualties. The war with Japan raged on, and perhaps Churchill’s rather subdued announcement of the German surrender reflected his knowledge of what lay ahead for the unfortunate Japanese people if they didn’t lay down their arms soon. Nellie Last, whose diary is quoted in Juliet Gardiner’s ‘The 1940s House’, found it hard to move her thoughts beyond the tragedies of the present, but said to herself on hearing the announcement of a national holiday to celebrate the war’s end, “Well dash it, we must celebrate somehow – I’ll open this tin of pears.” This she duly did. 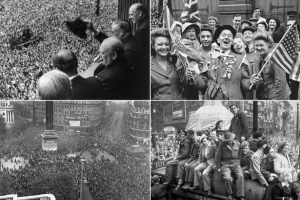 Many felt similarly shaky about the future, but as lights all over London blazed forth on the evening of VE Day, having been dark for almost 6 long years, not to mention bonfires and fireworks, floodlights and searchlights, the children’s eyes shone with excitement. Surely few people could have resisted cracking a smile at that glorious sight!

Below is the text of the broadcast in which, at 3pm British Double Summer Time on May 8, 1945, Mr. Winston Churchill announced the end of the fighting in Europe. Later the same day, H.M. the King broadcast his own message of thanksgiving, which is also reproduced. Both appear in our Historic Documents archive as part of ‘The Second Great War, Volume 8’, edited by Sir John Hammerton. 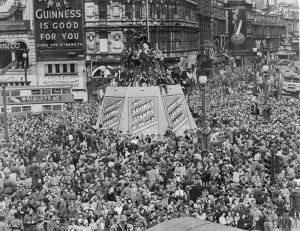 Yesterday morning at 2.41 a.m. at headquarters, General Jodl, the representative of the German High Command, and Grand Admiral Dönitz, the designated head of the German State, signed the act of unconditional surrender of all German land, sea, and air forces in Europe to the Allied Expeditionary Force, and simultaneously to the Soviet High Command.

Today this agreement will be ratified and confirmed at Berlin, where Air Chief Marshal Tedder, Deputy Supreme Commander of the Allied Expeditionary Force, and General de Lattre de Tassigny will sign on behalf of General Eisenhower. Marshal Zhukov will sign on behalf of the Soviet High Command. The German representative will be Field-Marshal Keitel, Chief of the High Command, and the Commanders-in-Chief of the German Army, Navy, and Air Forces. 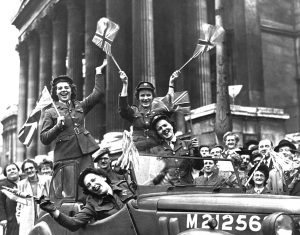 Hostilities will end officially at one minute after midnight tonight (Tuesday, May 8), but in the interests of saving lives the “Cease Fire” began yesterday to be sounded all along the front, and our dear Channel Islands are also to be freed today.

The Germans are still in places resisting the Russian troops, but should they continue to do so after midnight they will, of course, deprive themselves of the protection of the laws of war, and will be attacked from all quarters by the Allied troops. It is not surprising that on such long fronts and in the existing disorder of the enemy the commands of the German High Command should not in every case be obeyed immediately. This does not, in our opinion, with the best military advice at our disposal, constitute any reason for withholding from the nation the facts communicated to us by General Eisenhower of the unconditional surrender already signed at Rheims, nor should it prevent us from celebrating today and tomorrow (Wednesday) as Victory in Europe days. 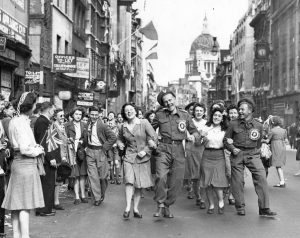 Today, perhaps we shall think mostly of ourselves. Tomorrow, we shall pay a particular tribute to our Russian comrades, whose prowess in the field has been one of the grand contributions to the general victory.

The German war is therefore at an end. After years of intense preparation, Germany hurled herself on Poland at the beginning of September 1939; and, in pursuance of our guarantee to Poland and in agreement with the French Republic, Great Britain, and the British Empire and Commonwealth of Nations, declared war upon this foul aggression. After gallant France had been struck down we, from this island and from our united Empire, maintained the struggle single-handedly for a whole year until we were joined by the military might of Soviet Russia and later by the overwhelming power and resources of the United States of America. 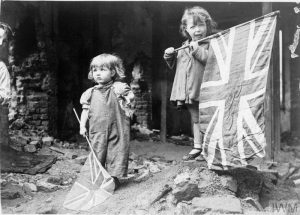 Two small girls waving their flags in the rubble of Battersea,

Finally almost the whole world was combined against the evil-doers, who are now prostrate before us. Our gratitude to our splendid Allies goes forth from all our hearts in this island and throughout the British Empire.

We may allow ourselves a brief period of rejoicing; but let us not forget for a moment the toil and efforts that lie ahead. Japan, with all her treachery and greed, remains unsubdued. The injury she has inflicted on Great Britain, the United States, and other countries, and her detestable cruelties, call for justice and retribution. We must now devote all our strength and resources to the completion of our task, both at home and abroad. Advance, Britannia! Long live the cause of freedom! God save the King! 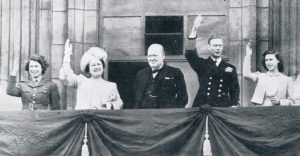 Today we give thanks to Almighty God for a great deliverance.

Speaking from our Empire’s oldest capital city, war-battered but never for one moment daunted or dismayed – speaking from London, I ask you to join with me in that act of thanksgiving.

Germany, the enemy who drove all Europe into war, has finally been overcome. In the Far East we have yet to deal with the Japanese, a determined and cruel foe. To this we shall turn with the utmost resolve and with all our resources. But at this hour, when the dreadful shadow of war has passed from our hearts and homes in these islands, we may at last make one pause for thanksgiving and then turn our thoughts to the tasks all over the world which peace in Europe brings with it.

Let us remember those who will not come back, their constancy and courage in battle, their sacrifice and endurance in the face of a merciless enemy; let us remember the men in all the Services and the women in all the Services who have laid down their lives. We have come to the end of our tribulation, and they are not with us at the moment of rejoicing.

Then let us salute in proud gratitude the great host of the living who have brought us to victory. I cannot praise them to the measure of each one’s service, for in a total war the efforts of all rise to the same noble height and all are devoted to the common purpose. Armed or unarmed, men and women, you have fought, striven and endured to your utmost. No one knows that better than I do; and as your King I thank with a full heart those who bore arms so valiantly on land and sea, or in the air; and all civilians who, shouldering their many burdens, have carried them unflinchingly without complaint.

With those memories in our minds, let us think what it was that has upheld us through nearly six years of suffering and peril. The knowledge that everything was at stake: our freedom, our independence, our very existence as a people; but the knowledge also that in defending ourselves we were defending the liberties of the whole world; that our cause was the cause not of this nation only, not of this Empire and Commonwealth only, but of every land where freedom is cherished and law and liberty go hand in hand. In the darkest hours we knew that the enslaved and isolated peoples of Europe looked to us; their hopes were our hopes; their confidence confirmed our faith. We knew that, if we failed, the last remaining barrier against a world-wide tyranny would have fallen in ruins. But we did not fall. We kept our faith with ourselves and with one another; we kept faith and unity with our great allies. That faith and unity have carried us to victory through dangers which at times seemed overwhelming.

So let us resolve to bring to the tasks which lie ahead the same high confidence in our mission. Much hard work awaits us, both in the restoration of our own country after the ravages of war and in helping to restore peace and sanity to a shattered world…

There is great comfort in the thought that the years of darkness and danger in which the children of our country have grown up are over and, please God, for ever. We shall have failed, and the blood of our dearest will have flowed in vain if the victory which they died to win does not lead to a lasting peace, founded on justice and established in good will. To that, then, let us turn our thoughts on this day of just triumph and proud sorrow and then take up our work again, resolved as people to do nothing unworthy of those who have died for us and to make the world such a world as they would have desired, for their children and for ours… 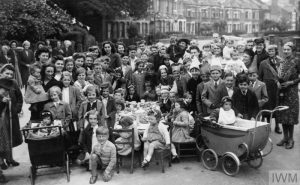 Women and children, gathered round a table in the middle of the road in Albacore Crescent, Lewisham SE13. Copyright: © IWM