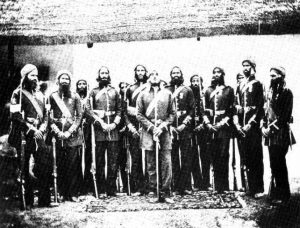 The Battle of Saragarhi was fought before the Tirah Campaign on 12th September 1897 between Sikh soldiers of the British Indian Army and Pashtun Orakzai tribesmen. It occurred in the North-West Frontier Province (now Khyber Pakhtunkhwa, Pakistan).

The British Indian contingent comprised 21 Sikh soldiers of the 36th Sikhs (now the 4th battalion of the Sikh Regiment), who were stationed at an army post and were attacked by around 10,000 Afghans. The Sikhs, led by Havildar Ishar Singh, chose to fight to the death, in what is considered by some military historians as one of history’s greatest last-stands.
The post was recaptured two days later by another British Indian contingent.

Saragarhi was a small village in the border district of Kohat, situated on the Samana Range, in present-day Pakistan. On 20th April 1894, the 36th Sikhs of the British Indian Army was created, under the command of Colonel J. Cook.
In August 1897, five companies of the 36th Sikhs under Lt. Col. John Haughton were sent to the northwest frontier of British India (modern-day Khyber Pakhtunkhwa) and were stationed at Samana Hills, Kurag, Sangar, Sahtop Dhar and Saragarhi.

The British had partially succeeded in getting control of this volatile area, but tribal Pashtuns continued to attack British personnel from time to time. Thus a series of forts, originally built by Ranjit Singh, the ruler of the Sikh Empire, were consolidated. Two of the forts were Fort Lockhart (on the Samana Range of the Hindu Kush mountains), and Fort Gulistan (Sulaiman Range), situated a few miles apart.

Fort Lockhart is located at 33.5562N 70.91877E. Due to the forts not being visible to each other, Saragarhi was created midway, as a heliographic communication post. The Saragarhi post, situated on a rocky ridge, consisted of a small block house with loop-holed ramparts and a signalling tower.

A general uprising by the Afghans began there in 1897, and between 27th August and 11th September many vigorous efforts by Pashtuns to capture the forts were thwarted by the 36th Sikhs. In 1897, insurgent and inimical activities had increased, and on 3rd and 9th September Afridi tribesmen, allied with the Afghans, attacked Fort Gulistan. Both the attacks were repulsed, and a relief column from Fort Lockhart, on its return trip, reinforced the signalling detachment positioned at Saragarhi, increasing its strength to three non-commissioned officers (NCOs) and eighteen other ranks (ORs). 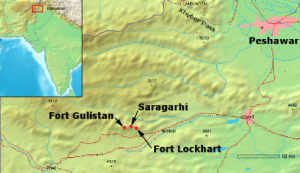 Details of the Battle of Saragarhi are considered fairly accurate, because Gurmukh Singh signalled events to Fort Lockhart by heliograph as they occurred.

Around 09:00, approximately 6,000-10,000 Afghans reach the signalling post at Saragarhi.
Sep. Gurmukh Singh signals to Col. Haughton, situated in Fort Lockhart, that they are under attack.
Col. Haughton states he cannot send immediate help to Saragarhi.

The soldiers in Saragarhi decide to fight to the last to prevent the enemy from reaching the forts.
Sep. Bhagwan Singh is the first soldier to be killed and Nk. Lal Singh is seriously wounded.
Nk. Lal Singh and Sep. Jiwa Singh reportedly carry the dead body of Bhagwan Singh back to the inner layer of the post.

The enemy breaks a portion of the wall of the picket.

Col. Haughton signals that he has estimated that there are between 10,000 and 14,000 Pashtuns attacking Saragarhi.
The leaders of the Pashtun forces reportedly make promises to the soldiers to entice them to surrender.
Reportedly two determined attempts are made to rush open the gate, but are unsuccessful.

Later, the wall is breached.
Thereafter, some of the fiercest hand-to-hand fighting occurs.

In an act of outstanding bravery, Hav. Ishar Singh orders his men to fall back into the inner layer, whilst he remains to fight. However, this is breached and all but one of the defending soldiers are killed, along with many of the Pashtuns.

Sep. Gurmukh Singh, who communicated the battle with Col. Haughton, was the last Sikh defender. He is stated to have killed 20 Afghans, the Pashtuns having to set fire to the post to kill him. As he was dying he was said to have yelled repeatedly the Sikh battle cry “Bole So Nihal, Sat Sri Akal!” (“One will be blessed eternally, who says that God is the ultimate truth!”).

Having destroyed Saragarhi, the Afghans turned their attention to Fort Gulistan, but they had been delayed too long, and reinforcements arrived there in the night of 13th –14th September, before the fort could be conquered. The Pashtuns later admitted that they had lost about 180 killed and many more wounded during the engagement against the 21 Sikh soldiers, but some 600 bodies are said to have been seen around the ruined post when the relief party arrived (however, the fort had been retaken, on 14th September, by the use of intensive artillery fire, which may have caused many casualties). The total casualties in the entire campaign, including the Battle of Saragarhi, numbered around 4,800.

The inscription of a commemorative tablet reads:

The Government of India have caused this tablet to be erected to the memory of the twenty one non-commissioned officers and men of the 36 Sikh Regiment of the Bengal Infantry whose names are engraved below as a perpetual record of the heroism shown by these gallant soldiers who died at their posts in the defense of the fort of Saragarhi, on the 12th September 1897, fighting against overwhelming numbers, thus proving their loyalty and devotion to their sovereign The Queen Empress of India and gloriously maintaining the reputation of the Sikhs for unflinching courage on the field of battle.

All the 21 Sikh non-commissioned officers and soldiers of other ranks who laid down their lives in the Battle of Saragarhi were from Majha region in Punjab and were posthumously awarded the Indian Order of Merit, the highest gallantry award of that time which an Indian soldier could receive. The corresponding gallantry award was the Victoria Cross. The award is equivalent to today’s Param Vir Chakra awarded by the President of India.

The names of the 21 recipients of the gallantry award are:

The epic poem “Khalsa Bahadur” is in memory of the Sikhs who died at Saragarhi.

The battle has become iconic of eastern military civilisation, the British Empire’s military history and Sikh history. The modern Sikh Regiment of the Indian Army continues to commemorate the Battle of Saragarhi on 12th September each year as the Regimental Battle Honours Day.

To commemorate the men the British built two Saragarhi Gurudwaras: one in Amritsar, very close to the main entrance of the Golden Temple, and another in Firozpur Cantonment, in the district that most of the men hailed from.

The Indian military, in particular the Indian Army, has been pushing for the battle to be taught in India’s schools. They want it taught due to the heroism shown by the Indian soldiers to act as inspiration for young children. There were articles like these, printed in the Punjab’s longest-established newspaper, The Tribune, in 1999: “the military action at Saragarhi is taught to students the world over and particularly to students in France.”

Although there seems to be no evidence for this claim (it is not, for example, on France’s national school curriculum the news was enough to provoke political debate, and the battle has been taught in schools in Punjab since 2000:

A similar request had also been put forward to Mr Badal during the battle’s state-level centenary celebrations at Ferozepore in 1997. A subsequent letter sent to the Punjab Government by the Saragarhi Memorial and Ethos Promotion Forum had also urged the State Government that the battle has many inspiring lessons for children. On hearing the acts of valour, the British Parliament had then risen in unison to pay homage to the fallen soldiers.

Saragarhi Day in the UK

The first recorded public discourse on Saragarhi was delivered by Viscount Lord Slim in 2001 when he delivered the annual Portraits of Courage lecture at the Imperial War Museum. This was hosted by the Maharaja Duleep Singh Centenary Trust. In May 2002 the Prince of Wales inaugurated the Jawans to Generals exhibition which featured a section on Saragarhi.

The exhibition successfully toured the UK and was seen by over 100,000 visitors. Saragarhi was introduced back into the UK by writer and filmmaker Jay Singh-Sohal and the British Army with the launch of the book Saragarhi: The Forgotten Battle in 2013 at Old College Royal Military Academy Sandhurst.

It has since been commemorated each year on its battle honour day by the British Armed Forces. In 2014 the commemoration also took place at Sandhurst at the Indian Army Memorial Room. In 2015 it took place at the Honourable Artillery Company in London, where it is also due to take place in 2016.

Various senior ministers and armed forces generals have paid tribute to Sikh service by mentioning the story of Saragarhi. In April 2016 the Defence Secretary Michael Fallon MP made mention as a special Vaisakhi event at the Ministry of Defence. In June 2016 the Chief of the General Staff Sir Nick Carter did the same at a special British Sikh Association dinner.

The battle has frequently been compared to the Battle of Thermopylae, where a small Greek force faced a large Persian army under Xerxes I in 480 BC. In both cases, a small defending force faced overwhelming odds, fighting to the last man and inflicting an extremely disproportionate number of fatalities on the attacking force.

In the September of 2017, Saragarhi: The True Story, a documentary by UK-based journalist-filmmaker Jay Singh-Sohal, was screened at the National Memorial Arboretum in Staffordshire to mark the 120th anniversary of the epic frontier battle.

As of December 2017, there are three Bollywood films being produced regarding the battle:

Sons of Sardaar: The Battle of Saragarhi. In July 2016, Ajay Devgn, shared a poster of the film, a sequel to Son of Sardaar. In August 2017, Devgn stated: “We are working on the script but it won’t happen for another two years because of the scale of the project.”

Battle of Saragarhi. In August 2016, Randeep Hooda shared the first look on his Twitter page. This film is to be directed by Rajkumar Santoshi, starring Randeep Hooda, Vikramjeet Virk, and Danny Denzongpa. Filming is set to take place between November 2017 and March 2018.

In October 2017, Karan Johar announced a film titled Kesari, based on the Battle of Saragarhi, to be directed by Anurag Singh, starring Akshay Kumar, due to be released at Holi 2019.

With regards to speculation about multiple films being made about the battle, Randeep Hooda stated: “It is good because there were 21 Sikh heroes in that battle and each one of them deserved to have a movie made on them. So actually there should be 21 films made on them.”