Home » Articles » Past in the Present

On a dull December day in 1985, Major von Merveldt led The Light Division out of Winchester`s Peninsula Barracks for the last time. It had a reputation of being a happy barracks, but it was the end of an era.

The elegant 18th and 19th century buildings and 15 acre site faced an uncertain future, and then Winchester City Council planners and Councillors announced, unbelievably, that they wanted to demolish and clear the site. The parade ground, was to have become a multi-story car park…

Winning the battle of the Peninsula Barracks secured a gem for tourists and residents. There are now 24 apartments and 100 houses and Winchester now has a cinema in the former garrison church and gained a luxury hotel.

Thankfully, the bulldozers where beaten back by a local architect with the support of SAVE Britain`s Heritage. It was a victory made possible by a find in a skip.

Peninsula Barracks had a distinctly distinguished service. In the First World War wounded soldiers were taken to the hospital that Florence Nightingale helped design. In the Second World War American and Canadian troo

ps spent their final nights ashore before the D-Day landings and were inspected by Prime Minster Winston Churchill.

Eventually the barracks closed.  If there had been a will to keep them in the middle of the county town it could have   been done, but the Ministry of Defense (MOD) saw pound signs.  Yet it was crown land and the MOD had it on lease at a low rent

When the site was finally sold for about £2.5 Million, a third of it was immediately sold on for £10 Million.

After the soldiers moved out, the defects were reveled. Water appeared in the deserted buildings, slates slipped from the roofs, lead flaps were lifted by the wind and left unattended, and saplings grew on parapets.

Winchester`s Councillors and town planners had the ideal solution. Wipe out over 150 years of history by total demolition. Barbarians.

The man who stopped this was architect Huw Thomas. The organisation SAVE asked Huw to produce an alternative scheme. This was then reversed: Huw produced a scheme and enlisted SAVE`s support.

” I was invited to SAVE`s exhibition (Save Bastions) in London in 1993,” said Huw. I did’nt want to go, because I`m not particularly interested in military buildings, but as i walked around the gallery I saw a photograph of Peninsula Barracks . I was shocked My offices were opposite and I had not been informed.

The public consultation was only three days. ” When I got back to Winchester I found most of the barracks was to be destroyed. The Lower Barracks would be completely shattered and replaced by four or five story block – unbelievable – a pastiche of the Victorian architecture, with three or four storey`s beneath the ground for car parking.

“I was furious that the planner were contemplating wreaking it. It was one of the few large important barracks representing the high-noon of the British Empire. So i started a campaign. When I realised it was no good on my own. I got in touch with SAVE. We got the media on our side and local people, Winchester Collage and the Winchester Preservation Trust came on board. We produced a colourful brochure.”

Despite all this the planning committee approved the barrack`s destruction. Huw was dejected and then… a miracle.

” I was walking round the barracks one day and looked in a skip. The army had thrown away piles of papers, including drawings of every single building: I, er requisitioned them.”

These should have been sent to the Public Records Office. Had they done so, Huw would not have been able to produce a plan. ” I knew exactly what each building would become. For instance, the garrison church in Southgate Street could become a cinema. There was a grubby hotel, Southgate Hotel, who the new owner, Robin Hanson, intended to make into a Luxury Hotel du Vin.

He wanted a bit of the site, so now we have the poshest hotel in town, the first of a chain. ” I worked out how many houses and apartments there would be. I worked out the area of each one.”

Then Huw had to find a purchaser for the land and a developer. The first estate agent he visited, fortunately knew a jolly Irishman called Michael O`Brien. “Leave the figures with me for a few days and come back,” he told Huw, followed by, ” i think this works.”

To Whitehall’s credit, it did not accept the highest bid for the land. Perhaps the merit of Huw`s plan was appreciated over the barbaric bulldozers of Winchester council. So the dream could come true. Or most of the dream. The first building you see on entering Peninsula Barracks is a white concrete monstrosity, misguidedly called the Queens Building. This is not Huw`s design. “Unbelievable,” said Major Speirs. ” Entirely the responsibility of the city council.”

“The (head?) case officer in the planning department was one of the new breed called “urban planners`,” said Huw. The have a lot of power. Artists impressions, on which planning approval was granted, show the building much lower than it is. One indicated that the top of the building would be about level with the windows of the Great Hall.”

In contrast is the building opposite the museum block, across what was the parade ground. ” The original had been knocked down and replaced by a ghastly 1960s building,” recalled Huw. ” I pulled this down, got hold of Victorian photographs, counted the bricks, and replaced it.

I got stick from fellow architects. They felt it should have been a modern building. I thought, ‘no, I’ve got a rear piece of porcelain with a little chip out of it. I’m going to put the chip back in. Then it will be whole again. I put the composition back together.” Clearly a man with a vision , understanding and sympathy, unlike most architectural graduates of Legoland.

The result of Huw`s interpretation is grandly impressive. Harmonious buildings forming a dignified rectangle in the middle of which is a fabulous garden, raised up because, as the ground is a scheduled monument, no planting in the soil was allowed. ‘Elegance on parade in English Versailles’ was the headline in The Times when the garden was created in 1998.

“Wren had this continental approach to the palace,” said Huw. “He had this wonderful idea of a lovely parterres and a swath of a steps to the cathedral. His dream did not come true, but I thought I’d put a formal garden with a pond.”

Inevitably, these days, people said children would drown in a pond, and it should be a lot smaller. Huw wanted a big one, and got it. ” The pond was inspired by the Tuileries  gardens in Paris,” said Huw, ” where on Sunday children play with their toy boats in the pond. 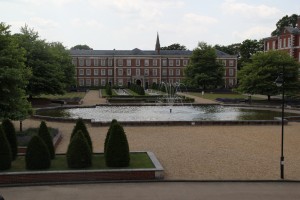 I also thought boules could be played here, but they put down the wrong gravel: the grass could be used for croquet, but these gentle genteel games don’t happen.

In the field by the Lower Barracks you can expect to see people playing with a ball, but they are not there. ” Then I thought of the soldiers who paraded and drilled here. So I used little yew trees to represent my soldiers. “They line up as a row at the bottom end of the garden. In the half light you can imagine the soldiers still standing there. Winchester city planners would have had a four-storey car park there.”

There were a couple of thwarted opportunities, including the possible exposure of a tower of Winchester Castle. ” It must be about four storeys high ,” said Huw ” I wanted to expose it, but English Heritage would not even contemplate it, so it remains buried.

“There was the old palace kitchens that could have made a tea room, but again, there was a lack of drive and imagination.” Now the past buildings have a decade in the ‘present’ used as private homes.

” There are five acres of public space here,’ Huw said. ” This is the first time since Victorian days that you have gardens that are really for public use., but are rarely used.

There is an air of private domain and people do not go there. ” But you can-and should, for it is a wonderful sight, just av few seconds’ walk from the West Gate.

With rising house prices, it is anything but cheap to live in the barracks these days. It is not surprising that some residents fight to defend their area, while others would like to have the estate closed off, with gates.

But while Derek Collinson, chairman of the residents’ Peninsula Square Management Company, said the military, residents and visitors live together quite happily, although the headquarters and the five military museums do not contribute to the cost of the management of the grounds. “Visitors enjoy sitting in the gardens. The biggest problem we have is kids throwing stones in the pond.”

” its a convenient spot to live, peaceful and quiet, apart from the goods train at night,” declared resident Dr Sladden.” We came in 1998, having moved to be near our daughter. The architecture and history of the place gives it a direct resonance. The ceilings are 14 ft high, so you feel it’s airy and spacious.”

” It would have been terrible to have pulled the buildings down,” added Mrs Sladden. “We are extremely lucky and very content. It’s nice and quiet and is so handy for the town.” “All the houses are freehold and the flats are leasehold. Our neighbours make this a pleasant place to live,” Concluded Dr Sladden.

So take a short stroll past the West Gate and turn left into the barracks. Apart from the fine buildings and gardens, you can only but marvel at Huw Thomas’s vision and determination and simply wonder how anyone could contemplate demolition, let alone politicians and public minions supposed to serve society.

If you have time there are five military museums as well.

Yes Winchester’s Peninsula Barracks is still a happy barracks, with a distinguished past, wonderful present and, now a secure future. 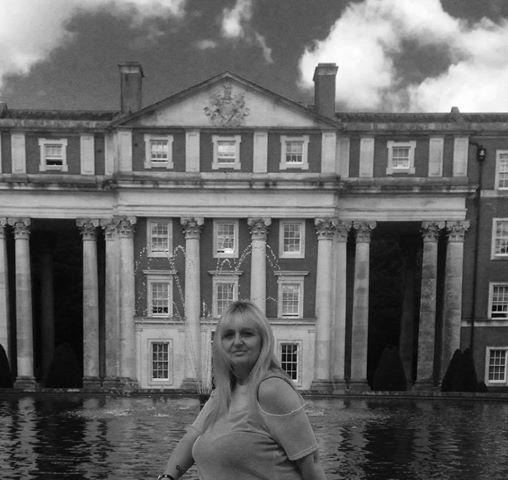 Places in the barracks were earmarked for memorials by Huw Thomas

on the plans but none taken up it seems.

Huw Thomas gave the directors of MAP a guided tour of the barracks in the early stages of the project, to show us where he had earmarked places in the barracks for memorials, (on his maps).

When he was giving the guided tour he told and showed the directors of MAP where human remains were unearthed during ground works, Huw said ” we placed the remains back in the ground facing east.”