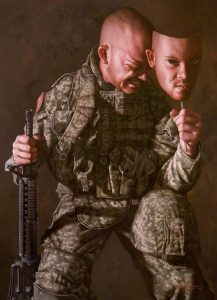 BANGING MY HEAD, AGAINST THE WALL,

WHY DOES NO ONE EVER HEAR MY CALL,

PLEASE, I NEED SOMEONE TO TALK TO,

WHY CANT YOU HEAR MY SCREAM?,

WAKING UP IN A COLD SWEAT,

AND FINDING IT’S ONLY A DREAM,

I NEED SOMEONE, SOMEONE WHO,

CAN SEE WHAT I CAN SEE,

WE NEED EACH OTHER, YOU AND ME

A SOLDIER THAT HAS BEEN TO WAR,

ONLY HE WOULD KNOW THE SCORE,

CRAZY THINGS THAT MAKE ME CRY,

FEELING LUCKY, I DID NOT DIE,

LAYING FLAT OUT ON THE FLOOR,

WHEN ALL IT WAS, THAT FRIGHTENED ME,

WAS THE SLAMMING OF A DOOR,

COULD YOU EVEN UNDERSTAND,

ONLY A SOLDIER COULD HOLD MY HAND,

IT WILL BE ALRIGHT, I WILL STAY WITH YOU,

THROUGH THE LONG DARK NIGHT,

I THANK THE GODS THAT HE’S STILL THERE,

HE WAS WITH ME TILL NIGHTS END,

MY SOLDIER, MY ULTIMATE FRIEND.

Post-traumatic stress disorder (PTSD) is a mental disorder that can develop after a person is exposed to a traumatic event, such as sexual assault, warfare, traffic collisions, or other threats on a person’s life. Symptoms may include disturbing thoughts, feelings, or dreams related to the events, mental or physical distress to trauma-related cues, attempts to avoid trauma-related cues, alterations in how a person thinks and feels, and increased arousal. These symptoms last for more than a month after the event. Young children are less likely to show distress but instead may express their memories through play. Those with PTSD are at a higher risk of suicide.

Prevention may be possible when therapy is targeted at those with early symptoms but is not effective when carried out among all people following trauma. The main treatments for people with PTSD are counselling and medication. A number of different types of therapy may be useful. This may occur one-on-one or in a group. Antidepressants of the selective serotonin reuptake inhibitor type are the first-line medications for PTSD and result in benefit in about half of people. These benefits are less than those seen with therapy. It is unclear if using medications and therapy together has greater benefit. Other medications do not have enough evidence to support their use and in the case of benzodiazepines may worsen outcomes.

In the United States about 3.5% of adults have PTSD in a given year, and 9% of people develop it at some point in their life. In much of the rest of the world, rates during a given year are between 0.5% and 1%. Higher rates may occur in regions of armed conflict. It is more common in women than men.Symptoms of trauma-related mental disorders have been documented since at least the time of the ancient Greeks. During the World Wars study increased and it was known under various terms including “shell shock” and “combat neurosis”.

The term “post-traumatic stress disorder” came into use in the 1970s in large part due to the diagnoses of US military veterans of the Vietnam War. It was officially recognized by the American Psychiatric Association in 1980 in the third edition of the Diagnostic and Statistical Manual of Mental Disorders (DSM-III).

PTSD was classified as an anxiety disorder in the DSM-IV, but has since been reclassified as a “trauma- and stressor-related disorder” in the DSM-5. The characteristic symptoms are not present before exposure to the traumatic event. In the typical case, the individual with PTSD persistently avoids trauma-related thoughts and emotions, and discussion of the traumatic event, and may even have amnesia of the event.

However, the event is commonly relived by the individual through intrusive, recurrent recollections, flashbacks, and nightmares. While it is common to have symptoms after any traumatic event, these must persist to a sufficient degree (i.e., causing dysfunction in life or clinical levels of distress) for longer than one month after the trauma to be classified as PTSD (clinically significant dysfunction or distress for less than one month after the trauma may be acute stress disorder).

Persons considered at risk include, for example, combat military personnel, victims of natural disasters, concentration camp survivors, and victims of violent crime. Individuals frequently experience “survivor’s guilt” for remaining alive while others died. Causes of the symptoms of PTSD are the experiencing or witnessing of a stressor event involving death, serious injury or such threat to the self or others in a situation in which the individual felt intense fear, horror, or powerlessness. Persons employed in occupations that expose them to violence (such as soldiers) or disasters (such as emergency service workers) are also at risk. Other occupations that are at higher risk, including police officers, firefighters, ambulance personnel, health care professionals, train drivers, divers, journalists, and sailors, in addition to people who work at banks, post offices or in stores. The size of the hippocampus is inversely related to post-traumatic stress disorder and treatment success; the smaller the higher risk of PTSD.

Posttraumatic stress reactions have not been studied as well in children and adolescents as adults.The rate of PTSD may be lower in children than adults, but in the absence of therapy, symptoms may continue for decades. One estimate suggests that the proportion of children and adolescents having PTSD in a non-wartorn population in a developed country may be 1% compared to 1.5% to 3% of adults, and much lower below the age of 10 years. On average, 16% of children exposed to a traumatic event develop PTSD, varying according to type of exposure and gender.

Predictor models have consistently found that childhood trauma, chronic adversity, and familial stressors increase risk for PTSD as well as risk for biological markers of risk for PTSD after a traumatic event in adulthood. Experiencing bullying as a child or an adult has been correlated with the development of PTSD. Peritraumatic dissociation in children is a predictive indicator of the development of PTSD later in life. This effect of childhood trauma, which is not well-understood, may be a marker for both traumatic experiences and attachment problems. Proximity to, duration of, and severity of the trauma make an impact, and interpersonal traumas cause more problems than impersonal ones.