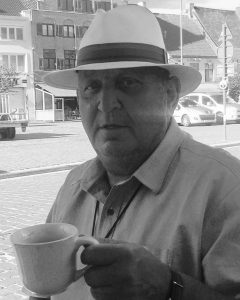 When the rag was a flag, and the staff was a Pole, As a youth I would think of when they were whole.

But now I’m a man and old I might be. But my BADGE is still here for all to see.

Move to the left, move to the right
If we don’t get this done
We’ll be here all night.

Down to the ranges
What a good shot
Here comes the stew, and it’s not very hot.

Out on the Beacons
With one week to go,
The going is hard in this deep cold snow.

The Band marches on
This is my proud day
Leaves coming up,
I’ll be home with some pay.

(To sit and think a bit)

A memorial to stand so proud,
To catch the eye of the passing crowd.

Take a rest have a seat,
See who passes, who you meet.

And while you sit in the cool day air,
Think about these stone carved chairs.

To some it’s just a piece of stone,
To others, a symbol that this was once, their home.

And when you leave here, And Leave you must.
Remember those Riflemen, who now are Dust,

In memory of all Riflemen.
Who have passed through Peninsula Barracks
And called It “Home”.

Grandad made me laugh, He also made me cry.
Often he would ramble, and I often wondered why

Told me he had nightmares, and was frightened of the dark,
Also said he hated, walking in the park.

He mentioned “ Knoddys Washing”
And I said “Love kids TV”
But I shut up rather quickly, when he turned and glared at me.

Then came that sad September, When Grandad passed away.
When Friends and Family gathered to send him on his way.

Then late in December, A parcel came for me.
With some of Grandads possessions.
So it didn’t go under the tree.

One photo and letters,
Paper cuttings to.
A Brass belt buckle
And a Cap badge,
With a bullet hole right through.

The cracked and faded photo was of a group of men.
Sitting in a dugout that looked just like a den,

I turned it over slowly,and began to read.
These words they still haunt me
His ramblings, I didn’t heed.

Killed 11th November 1914
At the Battle of “NONNE BOSSCHEN ”

Could I, Should I, Will I or not,
Travel to Winchester to see my Old Lot.
Thirty years since I’ve been down there.
Could I, should I, Will I Dare.
Old and Fat, With Greying Hair
Got a Limp, and use a stick.
Still look smart, But not as quick.
Hotel booked, Train ticket to.
More spit and polish on this other shoe.
Brand new Blazer, And Regi Tie
Better go before I die….

Cold and windy on Patrol
Gets right through to one’s poor soul
Much, much, better than the dreaded dole.

Move to the left, Move to the right
Don’t bunch up, but keep it tight

Watch that window, Watch that car
Not much longer, we’re not going far

Who’s that person, I know that face
Come on guys lets pick up the pace

ID. checked, and we know it’s him
Call for a vehicle and let’s get him in
The people are gathering
They’ll soon start a din.

Here come the stones, the verbal abuse
Hate this place, it’s so obtuse
One man down, But he’s ok
We’ve got to move on; it’s no place to stay.

Back at base, a warmer place
The man is known and arrested
Weapons checked, now we get rested.

Saw my mucker the other day
Down the road Fazakerley way
Found the ward, found the bed
..Jesus Christ !!!!!.
I thought he was dead.
Tubes in here tubes in there ..
Then the bugger rose up and got me a chair.

Snipers, Nail Bombs, Bottles and stones.
None of these things Broke my bones.

The damage is here, All in my head.

When the cold hearted Bastards
…… shot my friend Dead.

All aboard hold on tight
Going to take you on a ride of fright!!!!
[These few words will haunt me later]

Sat up straight in the Cupola
Wearing my new Battle bowler

Bang you head cut your thumb
Even makes your bottom numb

Then came the day it flew away
And the dead man’s pedal, didn’t work

Up went the revs
Off like a dart
Fluttering stomach
Great beating Heart
Lucky for me it was only a F..t

Crabbing, crabbing,
Yes, slowing down
Feel quite sick after that last town.

From the corporal just above
Comes a Knee, a gentle shove

“Not your fault Driver”, Bloody well done
As we come to a halt in the afternoon Sun.

Pipes and Ovens, Rollers to” What a place to Fight your way through”.
The smell of warm rotting bread,
A Walk-in the Park the Boss man said.
See a Gunman take a shot, Back it came just as Hot,was it a ricochet…I think not.
Moving forward bit by bit…Jesus Christ this place is Shit.
Along a Gantry,Down some stairs….Made it through…I’ll say some Prayers.