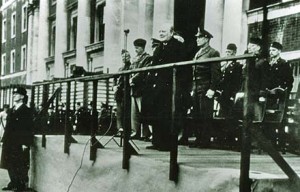 Reviewing American troops in the spring of 1944 prior the D. Day Landings. 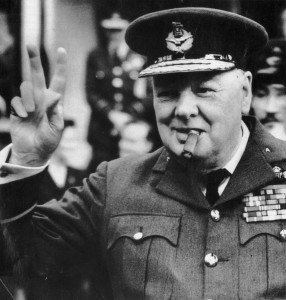 Sir Winston Leonard Spencer-Churchill, KG, OM, CH, TD, DL, FRS, RA (30th of November 1874 – 24th of January 1965) was a British politician who was the Prime Minister of the United Kingdom from 1940 to 1945 and again from 1951 to 1955. Widely regarded as one of the greatest wartime leaders of the 20th century, Churchill was also an officer in the British Army, a historian, a writer, and an artist. He is the only British Prime Minister to have won the Nobel Prize in Literature, and was the first person to be made an honorary citizen of the United States.
Churchill was born into the aristocratic family of the Dukes of Marlborough, a branch of the Spencer family. His father, Lord Randolph Churchill, was a charismatic politician who served as Chancellor of the Exchequer; his mother, Jennie Jerome, was an American socialite. As a young army officer, he saw action in British India, the Sudan, and the Second Boer War. He gained fame as a war correspondent and wrote books about his campaigns.
At the forefront of politics for fifty years, he held many political and cabinet positions. Before the First World War, he served as President of the Board of Trade, Home Secretary, and First Lord of the Admiralty as part of the Asquith Liberal government. During the war, he continued as First Lord of the Admiralty until the disastrous Gallipoli Campaign caused his departure from government. He then briefly resumed active army service on the Western Front as commander of the 6th Battalion of the Royal Scots Fusiliers. He returned to government as Minister of Munitions, Secretary of State for War, and Secretary of State for Air. After the War, Churchill served as Chancellor of the Exchequer in the Conservative (Baldwin) government of 1924–29, controversially returning the pound sterling in 1925 to the gold standard at its pre-war parity, a move widely seen as creating deflationary pressure on the UK economy. Also controversial were his opposition to increased home rule for India and his resistance to the 1936 abdication of Edward VIII.
Out of office and politically “in the wilderness” during the 1930s, Churchill took the lead in warning about Nazi Germany and in campaigning for rearmament. On the outbreak of the Second World War, he was again appointed First Lord of the Admiralty. Following the resignation of Neville Chamberlain on the 10th of May 1940, Churchill became Prime Minister. His steadfast refusal to consider defeat, surrender, or a compromise peace helped inspire British resistance, especially during the difficult early days of the War when Britain stood alone in its active opposition to Adolf Hitler. Churchill was particularly noted for his speeches and radio broadcasts, which helped inspire the British people. He led Britain as Prime Minister until victory over Nazi Germany had been secured.
After the Conservative Party lost the 1945 election, he became Leader of the Opposition to the Labour Government. After winning the 1951 election, he again became Prime Minister, before retiring in 1955. Upon his death, Elizabeth II granted him the honour of a state funeral, which saw one of the largest assemblies of world statesmen in history. Named the Greatest Briton of all time in a 2002 poll, Churchill is widely regarded as being among the most influential people in British history, consistently ranking well in opinion polls of Prime Ministers of the United Kingdom. 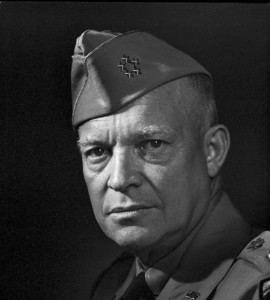 Dwight David “Ike” Eisenhower (pronounced /ˈaɪzənhaʊər/, eye-zən-how-ər; October 14th , 1890 – March 28th, 1969) was the 34th President of the United States from 1953 until 1961. He was a five-star general in the United States Army during World War II and served as Supreme Commander of the Allied Forces in Europe; he had responsibility for planning and supervising the invasion of North Africa in Operation Torch in 1942–43 and the successful invasion of France and Germany in 1944–45 from the Western Front. In 1951, he became the first supreme commander of NATO.
Eisenhower was of Pennsylvania Dutch ancestry and was raised in a large family in Kansas by parents with a strong religious background. He attended and graduated from West Point and later married and had two sons. After World War II, Eisenhower served as Army Chief of Staff under President Harry S. Truman then assumed the post of President at Columbia University.
Eisenhower entered the 1952 presidential race as a Republican to counter the non-interventionism of Senator Robert A. Taft and to crusade against “Communism, Korea and corruption”. He won by a landslide, defeating Democrat Adlai Stevenson and ending two decades of the New Deal Coalition. In the first year of his presidency, Eisenhower deposed the leader of Iran in the 1953 Iranian coup d’état and used nuclear threats to conclude the Korean War with China. His New Look policy of nuclear deterrence gave priority to inexpensive nuclear weapons while reducing the funding for conventional military forces; the goal was to keep pressure on the Soviet Union and reduce federal deficits. In 1954, Eisenhower first articulated the domino theory in his description of the threat presented by the spread of communism. The Congress agreed to his request in 1955 for the Formosa Resolution, which enabled him to prevent Chinese communist aggression against Chinese nationalists and established the U.S. policy of defending Taiwan. When the Soviets launched Sputnik in 1957, he had to play catch-up in the space race. Eisenhower forced Israel, the UK, and France to end their invasion of Egypt during the Suez Crisis of 1956. In 1958, he sent 15,000 U.S. troops to Lebanon to prevent the pro-Western government from falling to a Nasser-inspired revolution. Near the end of his term, his efforts to set up a summit meeting with the Soviets collapsed because of the U-2 incident. In his 1961 farewell address to the nation, Eisenhower expressed his concerns about future dangers of massive military spending, especially deficit spending, and coined the term “military–industrial complex”.
On the domestic front, he covertly opposed Joseph McCarthy and contributed to the end of McCarthyism by openly invoking the modern expanded version of executive privilege. He otherwise left most political activity to his Vice President, Richard Nixon. He was a moderate conservative who continued New Deal agencies and expanded Social Security.
Among his enduring innovations, he launched the Interstate Highway System; the Defense Advanced Research Projects Agency (DARPA), which led to the internet, among many invaluable outputs; the National Aeronautics and Space Administration (NASA), driving peaceful discovery in space; the establishment of strong science education via the National Defense Education Act; and encouraging peaceful use of nuclear power via amendments to the Atomic Energy Act.
In social policy, he sent federal troops to Little Rock, Arkansas, for the first time since Reconstruction to enforce federal court orders to desegregate public schools. He also signed civil rights legislation in 1957 and 1960 to protect the right to vote. He implemented desegregation of the armed forces in two years and made five appointments to the Supreme Court. He was the first term-limited president in accordance with the 22nd Amendment. Eisenhower’s two terms were peaceful ones for the most part and saw considerable economic prosperity except for a sharp recession in 1958–59. Eisenhower is often ranked highly among the U.S. presidents.

Hampshire and D-Day – The 60th Anniversary from Hampshire Cam

In the early hours of 6 June 1944, allied troops landed in Normandy. So began the greatest invasion in history and the eventual liberation of Europe and the end of the Second World War. Located directly opposite Normandy, Hampshire was the springboard for Operation Overlord – the codename for the allied invasion of Europe.
Hampshire became a vast armed camp, full of allied troops encamped in the towns, villages and the forests of the county. Winchester’s newly built bypass was requisitioned and became a giant tank park and camp for British and American troops, even Peninsula Barracks in the city was taken over by the 9th US Infantry Division. It was here the American troops were reviewed by Prime Minister Winston Churchill and General Eisenhower. 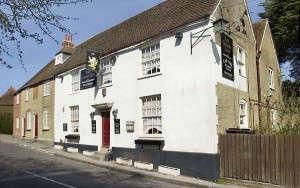 Plaque on the outer wall 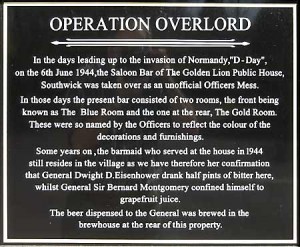 ALL GAVE SOME-SOME GAVE ALL

And all our Allies 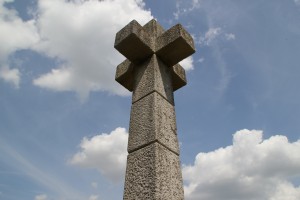 Sourced from Wikipedia and Goole