Above is a Fictional Badge, that is on the steps of the RGJ / Rifles museum,

at the former Peninsula Barracks, Winchester.

“WHY WOULD THE LEGENDARY

WANT TO LEAVE A FICTIONAL STONE BADGE AT THE ANCESTRAL HOME “

Legend grows over time, of folklore, stories past down a line, from story teller to listeners, often of great courage beyond that of mankind, of skill and fortitude, with strength of mind.

January 1800 a legend was born, men of the rifle, and dark green was worn, no bright colours that looked good on the eye, war was no longer a game, with rules that the generals did apply.

At one with a rifle, the legend did grow, men of great skill, soon every enemy officer, in battle were afraid to show, the men of the 95th became the storm, the building block of an elite, and a new British Army was born.

Not loved by their own officer class, to whom war was a game, much like a cricket match, dressed in bright colours, standing in squares, muskets pointed in a general direction, unable to hit a barn door, even if one was there.

The pull of the legend had begun, thousands volunteered to join them, a new battalion was formed, now they were the chosen ones, now the elite of the elite, honours in battle, Peninsular was won.

The Napoleonic wars over, the Rifle Brigade was born, the unique skills of the 95th, the new Regiment did spawn, an elite that the British Army could no longer do without, history shows others from this will sprout.

The 60th gave birth to the KRRC, but first known as the Royal American Regiment, in North America, they fought for this country, a unique force of fighting men, with skills of the forest and woods, were well proven.

1908, came the Ox and Bucks, 43rd and 52nd, in the true style of a legend, that had many different names and looks, Oxfordshire and Monmouthshire, 43rd and 52nd, regiments of foot, in full bloom the seeds of 1881, the legend had begun.

1958 a stroke of genius, three legends became one, the story of the Green Jackets had begun, a brigade built on glory and history, skill and stoicism, the elite of the elite, from all others comes great envy.

What men are these who dress in green, with a pace of the wind, never forgotten, once seen, steady of arm and accurate of eye, with the skills of great warriors, that never say die.

1966, “Royal” became the men in green, the Colonel-in-Chief, of the Royal Green Jackets, Elizabeth II, our Queen, the legend complete, the Black Mafia, “Swift and Bold”, that forever in history, great stories will be told.

The stories of King Arthur that we know and love are fiction. There might be a person that the Real King Arthur was based upon, or even a number of heroes that his life is based on – but there was no King in the Middle Ages who was called King Arthur. This page therefore details the biography and life of the fictional King Arthur based on the story of King Arthur and the Knights of the Round Table in books such as “Le Morte D’Arthur” by Sir Thomas Malory,

Did live in Winchester as did our forefather Regiments…

The Rifle Brigade (Prince Consort`s Own)

The ancestral home of The Royal Green Jackets

Have all served their Queen and Country well, some making the ultimate sacrifice…

Lives on in Winchester and is remembered and visited daily…

by MEMORIAL AT PENINSULA LTD

We were and still are LEGEND… 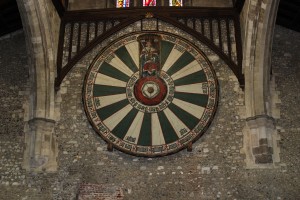 Knights of the Round Table

Sir Thomas Malory (c. 1405 – March 14th, 1471) was an English writer, who wrote a book based on the legend of King Arthur. It was called Le Morte d’Arthur. In it, he wrote his version of the Code of Chivalry:

Always to flee treason (do not commit treason, a crime against your country or king)

To by no means be cruel but to give mercy unto him who asks for mercy (Do not be mean. Grant mercy to those who ask, even in combat.)

To always do ladies, gentlewomen and widows succor (‘succor’ is an old word for help; this means that the knight must promise to help women if they need it. Note that this does not necessarily include peasantry.)

To never force ladies, gentlewomen or widows (never ‘harm’ women. Note that this does not necessarily include peasantry.)

anything less than god or country)

In different stories, there are different numbers of knights, ranging from 12 to more than 150. The Winchester Round Table shows 25 Knights. Most of the people believe that these are the knights of the round table:

Other Knights
This is a list of other knights mentioned as being Knights of the Round Table.