For some it is numbers for others shots fired.

For the Regiment, Battle honours adjourned on the Cap badges.

Cap badges that have been worn with pride depicting battle honours.

Battle honours that have shown history and been worn with pride, trophies of war, now defaced by some who try to change the course of history altering them.

Now rescued by two that respect those that achieved the honours the trophies of war, lost by many gained by few, history preserved to tell the story to old and new.

Trophies of war, for some a shackle to others a statement of history of bloodshed a deliverance awakening and triumph.

A war trophy can be a number of things, James Emerson Bryson was treated as a war trophy by the RGJ, a photo of his laid out body was displayed on the RGJA web site. It was removed when relatives of the Bryson family complained to the RGJA, as it was causing distress to the family.

MEMORIAL AT PENINSULA LTD own the copyrights to the graphic design of the Green Jackets Brigade and the Royal Green Jackets cap badges worn, some might say, that this is a trophy of war. 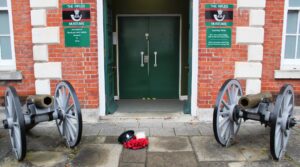 at the former Peninsula Barracks, Winchester.

The Trophies of War

From the ancient Greeks, came “Tropaion”, that’s trophy, in battle that has been won, warriors fight and warriors die, at the turning point of battle, a memorial piled high, the point where the enemy turned, and away did fly.

In commemoration of victory, dedicated to a god, trophies of the battle, for all to see, cross stakes or a chosen tree, where hangs the enemy’s armoury, a memorial in thanksgiving of victory.

The Romans in triumph would also display, trophies of culture, and of the enemy that day, a body not whole, a demonstration of dominance, over the deceased to behold.

The Roman Eagle, a trophy to hold, flags and standards, of victory told, such trophies will continue war, with pride and honour, for the loser to restore, the loss of such standards, into the psyche bore.

Trophies of war, can belong to the state, in reparation, the enemy must make, the cost of war, in truth is about lives, but the State thinks of finance, and to get that cost back, they will strive.

Souvenirs of weapons and flags, trophies of war, even a packet of fags, a warrior, may seek, a trophy of choice, something that’s special, even worth fighting for, and the bragging rights, for evermore.

In the Napoleonic war, the bronze eagle standard, was a trophy with the highest score, sooner than let it fall, into their enemy’s hands, it would be broken up, and burnt, then with wine, the ashes drank.

Regimental colours, are a great trophy of war, even in the Falklands, the Argentine Marines burnt theirs, to keep them out of the British Army’s hands, in the Imperial War Museum, the Taliban flag hangs.

For a warrior, a trophy is about time, a part of their life, and friends left behind, the true value, may only be in the holder’s hand, that trophy of war, of time and place, strong memories it may command.

In war, the winner takes all, they write the history, of how their enemy did fall, that. in itself, is a trophy of war, embellished or understated, to the victor the spoils, a trophy for sure.

Winners get trophies even today, for little more, then a victory, on a sporting day, no threat to life, or a fight to survive, just the best, the fastest, of those that arrived.

War trophies are nothing new, they are about the victory, and dominance, over those that fought against you, from a Stone Age axe, to a weapon of modern war, not the glory of death, but for the freedom worth fighting for.