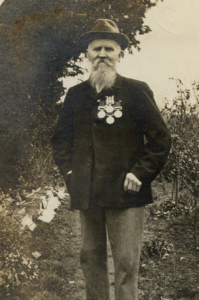 Above: Still hale in spite of his advancing years, former No 1499 Sergeant Charles William of the 2nd Battalion, the Rifle Brigade posed for the photographer probably sometime during World War One. Proudly wearing his campaign medal for service in India and Africa he was probably photographed in the yard of his home in the vicinity of Birmingham.

He transferred to the 2nd battalion, the Rifle Brigade on 1 September, 1867. Between 1867 and 1871 he would have been entitled to tree additional good conduct pays if he had not previously been promoted to sergeant. On 21 September 1874 he temporarily transferred administrative battalion of the Derbyshire Rifles before rejoining the 2nd Battalion on 6 May, 1875.

He took his final discharge on 8 June, 1875 being declared medically unfit for further military service.

Sergeant William’s active service is reflected by the medals seen in his photograph as well as entries in medal rolls and note in his discharge papers – none of which match up 100%.

In the photograph Williams’ wears the 1855 India General Service Medal with a single clasp. The Indian Mutiny Medal with the single clasp “Lucknow , the 1874 Ashantee Medal with the clasp “Coomassie” and the Long Service & Good Conduct Medal (LS&GC). His discharge papers confirm the entitlement to Indian Mutiny Medal, the Ashantee War Medal and the LS&GC Medal but makes no mention of the India General Service Medal nor any clasps. The medal roll for the Ashantee War Medal confirms Sergeant Williams’ entitlement to the “Coomassie” clasp since his name in included in the list of those of the 2nd Battalion who were “north of the Prah on the 4th Feby 1874.”

While no medal roll entries for either of Williams’ Indian medals have been found I do not suspect his entitlement to those medals.

When Williams celebrated his 95th birthday in 1932 an article appeared in the 19 January of that month edition of the Birmingham Mail. He is mentioned as being one of the very last surviving veterans of the mutiny and states that while he related how bad the fighting was during the siege of Lucknow it was in fact much worse in the jungle afterward.

The article also lists all of Williams’ awards and mentions the “North-west Frontier Indian Medal (1863-64)” which implies it was actually the 1854 India General Service Medal with the “North West Frontier” clasp.

In 1877 Charles Williams married Miss Sarah Innes at Newent, Gloucestershire and the couple would raise at least four children – Elizabeth (b. 1878), Charles (b. 1880), Walter (b. 1882) and Mary Ann 9b. 1885). It was with his first son Charles that the naming became interesting. The Sergeant Charles gave his namesake son the unusual middle name of Coomassie – obviously after his West African campaign. One naturally wonders why he chose the middle name of his eldest son from one of that clasps on his campaign medals.

Naturally North West Frontier may have been really odd not to mention verbose but at the same time he chose not to name his second son Lucknow. In any event Coomassie does have a certain ring to it and the name help keep a bit of family history alive for the next generation until 1965 when Charles Coomassie WIllaims passed away.

The old sergeant himself soldiered on until 1933 when he passed away on 7 October at Putley Green, Herefordshire at the ripe old age of 97 and at the time one of the last survivors of the Indian Mutiny. 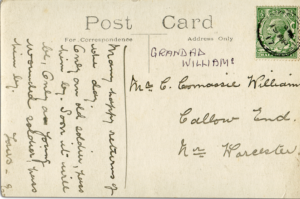 Above: The reverse side of Sergeant Charles Williams portrait photo postcard showing it having been sent to his son Charles Coomassie Williams on 19 April, 1917.
The sender signed the card only with the initial “E” and inscribed a somewhat cryptic poem that reads:

The poem seems to relate to the unnamed senders experiences during the Great War.

Credited to Soldiers of the Queen
Sourced from www.soldiersofthequeen.com