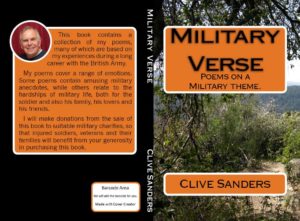 On sale in sale via Amazon https://www.amazon.com/Military-Verse-Clive-Sanders-ebook/dp/B01GZ0JNQA 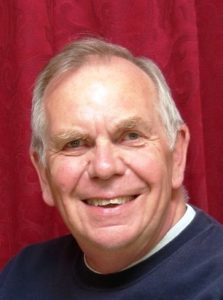 Clive joined the Royal Corps of Signals in 1965 as a Russian intercept operator and served as a soldier for 10 years, before leaving the Regular Army in 1975 to become a Civil Servant.

He became a civilian lecturer who trained Royal Signals interceptors and was offered a commission in 1995 as a Royal Signals G2 Staff Officer, in which role, he continued to serve until I retired at the age of 65 years in 2012.

He began writing my Military Verse in 2013 and found that there was a large audience for his poems.

He recently was appointed Poetry Facilitator to the Royal Hospital, Chelsea, where he greatly enjoy`s working with the Chelsea Pensioners to tell their experiences in poetic form.

THE TROUBLES
by Clive Sanders

None of us wanted to be there.
None of us knew what to do.
We`d not had a semblance of training.
We felt we were hundreds to few.
Politicians had sent us to Ulster,
As a barrier between warring sides.
We did not have a plan we could work to,
We just had to man the divides.

None knew how long we would be there,
None would believe thirty years.
We counted off days on our four months,
And tried not to show them our fears.
We hadn`t been trained for street warfare,
Surrounded by hatred and strife.
We worked to look after each other,
In friendships that still last for life.

We all lost good mates in the Troubles.
We remember their names every year.
Whenever we meet at reunions,
With memories of them always clear.
We got no applause for our suffering.
We carry our wounds with us still.
And now we have comrades arrested,
Which to us is the bitterest of pill.
©copyright protected

Unless You’ve Been a Soldier
by Clive Sanders

Unless you’ve been a soldier,
You just won’t understand.

The things that we have seen and done,
In the service of our land.

We were trained to live in combat,
And to deal with dreadful sights,
That shouldn’t be seen by anyone
And keep you awake at nights.

We don’t discuss the wounds we have,
To the body or the mind.

We just put our hurts behind us,
And turn our memories blind.

We are proud we served our country,
But remember those we lost.

For the freedom that you have today,
They paid the awful cost.

Look Deep in the Eyes of a Soldier
by Clive Sanders

Look deep in the eyes of a soldier
And take note of all that you see.

You will see lots of pride,
A degree of respect and a love for his family.

You will also see humour and laughter,
And a hint of the joker inside,
And you’ll also see signs of a gentleness,
Especially when the eyes open wide.

And if you stare deep in the pupils,
You will see there’s a steely resolve,
That shows that once he’s committed,
There’s no problem that he cannot solve.

But if you look that little bit deeper,
Past the eyes that always seem glad,
You will see little hints of the things that he’s seen,
Which occasionally make him feel sad.

So please understand the occasional tears,
And give all the support that you can,
For the soldier will try to hide away fears,
Because that’s what makes him a man.

A Soldier’s Wallet
by Clive Sanders

If you look in a young soldier’s wallet,
You will see it is covered with stains.
It will smell like a hyena’s breakfast,
That’s been pulled from a number of drains.

Then as soon as you open his wallet,
His ID card is in the first sleeve.
It carries the face of the soldier,
Just before he went on his first leave.

He has numerous cards in his wallet,
That help him feel rich and refined,
But he doesn’t pay bills using credit,
For most have been rudely declined.

There’s a photo of his latest girlfriend,
As she leans on her father’s new car.
She smiles as she looks in the camera,
With her breasts standing proud of their bra.

There isn’t much cash in his wallet,
Just enough to ensure he gets drunk.
But there won’t be enough for a taxi,
Or to take him back home to his bunk.

But there will be a lot of mementos,
Of adventures he has had in the past.
And there might be an old contraceptive,
Just in case he gets lucky at last.

The Old Man’s Glass of Whisky
by Clive Sanders

The old man’s glass of whisky
Was bigger than yesterday,
But still far short of that required
To chase the ghosts away.

Last night he’d dreamt of his best friend,
That he so badly missed,
Who had stepped upon a landmine
And vanished in pink mist.

The empties in his dustbin,
Told their own sad story,
Of just how much he had to drink,
To drown out the cost of glory.

His head was growing heavy,
And his eyes no longer saw,
But his mind was full of painful scenes
Of the dreadful price of war.

He was found by worried neighbours
Holding a bottle of cheap Scotch blend.
But the smile on his face appeared to say
He’d rejoined his long lost friend.

I Have Lived Amongst Men
by Clive Sanders

I am honoured to say, I have lived amongst men,
Who have stood by my side, and would do again.

We trained to be soldiers, we learned to be friends,
We faced life together, all that fate ever sends.

I was trained as a soldier, to be one of the best
I conquered my fears, and I passed every test.

I was proud in their company, especially when,
We stood shoulder to shoulder. I have lived amongst men.

The men I called comrades, during all of those years,
Shared my fun and my laughter, then my horror and tears.

We were taught how to snarl, but we just looked half-crazed,
We were cursed by by our foes, then occasionally praised.

We fought for the causes, we believed to be good,
As we held our positions and died where we stood.

I rejoice in the memories, that I recall now and then,
For I followed the code and I’ve lived amongst men.

The Chelsea Pensioners
by Clive Sanders

You can see him most mornings, around quarter past ten,
Marching fast down King’s Road, accompanied by Len.
They set a fast pace as they stride down the road,
Age has not slowed them and they carry no load.

At the corner they wheel like two spokes on a hub,
Then they slow to pathetic as they enter the Pub.
Painfully they limp across the bar to their seat,
He asks what Len’s drinking, which he know’s “Whisky, neat.”

At the bar when he’s ordered, he counts cash from his purse,
And before he’s done counting, up comes a nurse.
“Let me pay for your drinks.” the nurse gladly says,
And the Pensioner’s grateful that the young lady pays.

“Thank you my darling.” says old Len with a smile,
“This is the first drink we’ve had for quite a long while.”
In truth it was yesterday, at quarter past ten,
But the nurse doesn’t mind, she just likes these old men.

For she watches them go through this routine each day,
There is always some person who is happy to pay.
For these old Chelsea Pensioners in their tunics so red,
Have a fan club that keeps them well watered and fed.

And the stories they tell of their deeds long ago,
Before most in the pub had not started to grow,
Keep the drinks going down, to a chorus of cheers,
As the Pensioners reluctantly accept some more beers.

At the end of the day, when the pub finally closes,
The Pensioners come out and they follow their noses,
Back to the Hospital where they’ve lived for some years,
And they plan their campaign for tomorrow’s free beers.

You can always spot a Soldier
by Clive Sanders

Even when he’s left the Army, you can quickly tell the man
Who has served his queen and country well, in every way he can.

He will stand whenever the anthem’s played, his chest puffed out with pride,
He normally mixes with his old mates, who he has fought beside.

He will easily cry at movies that show kids in distress,
And will make enormous efforts to clear away a mess.
But there is one thing about him, which is loved by all he meets,
It’s the stories he can tell his friends of all his glorious feats.

But when he sits with soldier friends and they recall a sortie
The thing that sticks out most of all, is that they were sometimes naughty.

For there’s a scoundrel in his chuckle and a twinkle in his eye,
And a certain pride in the way he looks as he goes marching by.

A Special Thank You to Clive Sanders for sharing his Verses