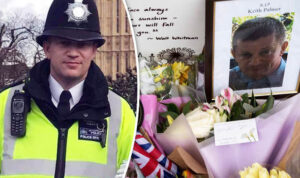 Tobias Martin Ellwood PC, MP (born 12th August 1966) is a British Conservative Party politician and author. He served in the Royal Green Jackets and reached the rank of captain.

He currently serves as the Member of Parliament (MP) for Bournemouth East and as UK Government Minister at the Foreign and Commonwealth Office.

Born in New York City to British parents, Ellwood was educated at schools in Bonn and Vienna. He attended Loughborough University from 1985–90, graduating with a BA (Hons) degree, and the Cass Business School at City University from 1997–8, where he received a Master of Business Administration degree (MBA).

From an officer cadet, Ellwood was commissioned as a second lieutenant in the Territorial Army in 1989, transferring to the Royal Green Jackets in the Regular Army in 1991, with promotion to lieutenant.

He was further promoted to captain in 1995, and transferred from the active list to the Reserve of Officers in 1996. After leaving the Army he became a researcher to the Conservative MP Tom King. He was elected Chairman of the Hertfordshire South West Conservative Association for a year in 1998, and has been a senior business manager with the London Stock Exchange since 1999.

Ellwood was elected as a Councillor of Dacorum Borough Council in Hertfordshire in 1999, and unsuccessfully contested the parliamentary seat of Worsley in Manchester at the 2001 general election being defeated by the sitting Labour MP Terry Lewis by 11,787 votes.

He achieved success at the 2005 general election, when selected to contest the safe Conservative seat of Bournemouth East to succeed the outgoing David Atkinson MP. Ellwood held Bournemouth East with a majority of 5,244 votes and remains the MP there. He made his maiden speech in the House of Commons on 19 May 2005.?

A vocal supporter of David Cameron’s campaign for the leadership of the Conservative Party, Ellwood was appointed to the Opposition Whips Office in December 2005. In the July 2007 reshuffle, Cameron promoted Ellwood to his frontbench team as Shadow Minister for Culture, Media and Sport, with specific responsibilities for gambling, licensing and tourism.

Ellwood has since stated that these responsibilities are also of specific interest to his Bournemouth constituents, a town of seaside tourism, numerous bars and nightclubs, and the site of a proposed casino development.?
He was criticised in the press after reportedly branding Liverpudlian landlords taking over pubs in his constituency as “criminals” in 2009. Ellwood claimed the comments had been taken out of context.

Following his return to Parliament in 2010, he was appointed Parliamentary Private Secretary (PPS) to then Defence Secretary, Dr Liam Fox, and in October 2011 was appointed PPS to David Lidington MP, Minister for Europe at the Foreign and Commonwealth Office.

On 15th July 2014 Ellwood was appointed as Parliamentary Under Secretary of State at the Foreign and Commonwealth Office.

In 2011 Ellwood was reported as saying “He should be given a good hiding behind the bike shed”, referring to the Conservative party rebel Mark Pritchard. He later claimed he was joking.

In 2010 Ellwood was threatened with arrest outside the House of Commons by the police after confronting them over an anti-war protestor.

Ellwood has also been appointed a Member of the Parliamentary Delegation to the NATO Assembly, 2014 and Parliamentary Advisor to the Prime Minister for the 2014 NATO Summit. He is a proponent of “double summer time”.

In 2011, Ellwood served on the Special Select Committee set up to scrutinise the Bill which became the Armed Forces Act 2011. He was also a member of the Public Bill Committee for the Defence Reform Act 2014.

In May 2014 he was one of seven unsuccessful candidates for the chairmanship of the House of Commons Defence Select Committee.

In 2015, he flouted public opinion and backed the move by IPSA to increase salaries for politicians by 10% when the rest of the public sector are on a freeze of 1%. He said he was left “counting the pennies”.

In September 2015, the Independent Parliamentary Standards Authority named Ellwood and 26 current and former MPs who failed to settle sums of up to £500 the previous year in overclaimed expenses, forcing them to be written off.

On 22nd March 2017, during a terrorist attack on Parliament, Ellwood gave mouth-to-mouth resuscitation and CPR to police officer Keith Palmer, who later died of his injuries.Ellwood was called a “hero” by those at Westminster and the press, as photos surfaced of him with blood on his face while he crouched over the body of the dying police officer.

Consequently, Ellwood received a lot of praise on social media for his actions, as well as being promised an appointment to the Privy Council for his response in the attack.

In July 2005, Ellwood married Hannah Ryan, a corporate lawyer, in East Yorkshire. He has a sister, Charlotte Ellwood-Aris. His brother, Jonathan, who was director of studies at the International School Ho Chi Minh City in Vietnam, was killed in the 2002 Bali bombing.

In June 2009 Ellwood was beaten by a gang of youths after confronting them for playing football in the street.