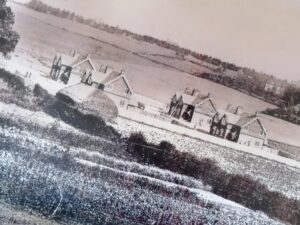 This is Green Jacket close, built before Stanmore even existed. It was part of farm land which fell under land in St Cross given to the regiment by the farmer to build houses for injured soldiers and their families. 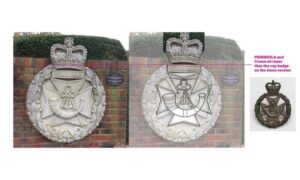 The above Badge is outside Green Jacket Close

as you can see it is incorrect to the Cap Badge Worn.

Let me firstly introduce myself, if you don’t already know who I am, my name is Andy Spalding (Ex WO2 RGJ), I am the property Manager for all Regt property throughout the Regt, but I’m also the Estate Manager for Green Jacket Close here in Winchester, which I want to talk about. 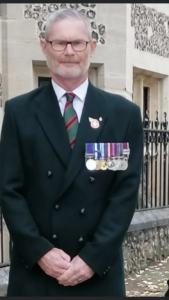 A lot of people within the Regt or antecedent Regiments, don’t or haven’t even heard about Green Jacket Close and I’m hoping that you will pass this information down to your association and anyone else that you feel will benefit from knowing about it, and letting them to apply to live there if they wish.

There is a waiting list for Green Jacket Close and is prioritized by the needs of the person that are on the list. The list is controlled by me, but the Regt trustee make the final decision who would get the property once it becomes available.

Here is a bit of information about Green Jacket Close
Green Jacket Close consists of 21 units off Stanmore Lane, Winchester. Details are:
a. 3 x semi-detached 2-bedroom houses, built in 1904

Application
a. It is quite acceptable to apply to be put on the waiting list before the age of 60 is reached. Applicants should apply to the Rifles Secretary Finance, RHQ the Rifles, Peninsula Barracks, Romsey Road, Winchester, Hampshire, SO23 8TS.

b. Applicants should bear in mind that the homes are covered by a Trust Deed, regulated by The Charity Commissioners. As such, the Rifles Benevolent Trust is required to allocate vacancies to those in need of assistance.

Charges Applicants should be aware that all properties are unfurnished, and residents pay their own Council Tax, water rates and utility bills and a maintenance charge of approximately for the properties are as follows:
a. 3 x semi-detached 2-bedroom houses = £305.00 per month

On 15 July 1904, the the Cottage Homes for disabled Riflemen, as they were then known, were opened by Field Marshal H R H the Duke of Connaught, Colonel in Chief of the Rifle Brigade, and H R H the Princess Christian of Schleswig Holstein, whose son, Prince Christian Victor, had died in 1900 in South Africa, while serving with the King’s Royal Rifle Corps.

The homes, which consisted of four pairs of semi detached cottages, were build as a memorial to the members of the King’s Royal Rifle Corps and the Rifle Brigade who had been killed in action or died of wounds or disease during the Boer War, a total of 44 Officers and 550 men. One of the Pairs of the 60th cottages was dedicated in memory of Prince Christian Victor and another pair of 95th cottages was given by the Duke of Connaught.

The money for the homes was raised by the Rifleman Aid Society, much of it by subscription from serving and former Officers, NCOs and men of the Regt but also included a number of large donations from individuals. The total cost was nearly £6000.

Upon formation of the The Rifles in 2007, Green Jacket close was absorbed into the Rifles Benevolent Trust and the occupation of the homes was opened up to all members of the Forming and Antecedent Regiments, as well as those who continue to serve with the Rifles. 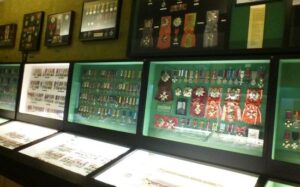