“The Grove is a living memorial, in harmony with nature and growing in stature.”

The Charity’s Objects are: –

(a) to develop and maintain the Allied Special Forces Memorial Grove as an independently funded amenity, garden area and open space situated within the National Memorial Arboretum, Alrewas, Staffordshire DE13 7AR. The gardens will be a place for remembrance, commemoration, education and quiet contemplation, in harmony with nature, and include memorials to the men and women who served with or assisted the Allied Special Forces during world war two and in conflicts since.

(b) to educate the public, veterans and armed forces about the civilian and military commemorations in the Grove without infringing on personal or national security.

In 1941 the 2nd Battalion re-roled as an airborne, specifically an Air Landing, unit, joining the 1st Airborne Division and in 1943 the 6th Airlanding Brigade, 6th Airborne Division. As part of Operation Deadstick just before the landings on D-Day 6 June 1944, D Company, 2nd Ox & Bucks Commanded by Maj. John Howard as well as Royal Engineers and men of the Glider Pilot Regiment (totalling 181 men), were to land via 6 Horsa gliders to capture the vital Pegasus Bridge over the Caen Canal and the bridge over the Orne River (known as Horsa Bridge and east of Pegasus). This was intended to secure the eastern flank to prevent German armour from reaching the British 3rd Infantry Division that was landing on Sword Beach.

The Ox and Bucks landed very close to their objectives at 16 minutes past midnight—the first Allied unit to land in France—they poured out of their battered gliders, completely surprising the German defenders, and taking the bridges within 10 minutes, losing two men—Lieutenant Den Brotheridge and Lance-Corporal Greenhalgh—in the process. One Glider assigned to the capture of Horsa Bridge was landed at the bridge over the River Dives, some 7 miles from where they were meant to land. They, in spite of this, captured the River Dives bridge, advanced through German lines towards the village of Ranville where they eventually rejoined the British forces. The Ox & Bucks were reinforced half an hour after the landings by 7 Para, with further units arriving shortly afterwards. The Germans launched many attempts to re-capture the bridges, all being repulsed. Later in the day, at about 1:00pm, Lord Lovat and elements of his 1st Special Service Brigade arrived to relieve the exhausted defenders, followed by the British 3rd Infantry Division. The operation was immortalised in the film The Longest Day.

Major Howard DSO, aged 31:
Company Commander.
After 6 six of service in the ranks of the KSLI and a spell with the Oxford City Police, he re-enlisted in 1939 and was commissioned into the Ox & Bucks LI (52nd) in 1940.
Quickly promoted to Major.
Landed at Pegasus Bridge within 15 yards of the bridge defences.
Wounded twice during fighting in Normandy.
Badly injured in 1944 in a vehicle accident and was invalided out of the army.
Passed away in 1999.
The actor Richard Todd played Maj John Howard in the film The Longest Day made in 1962.

Lieutenant Brotheridge, aged 29
Platoon Commander, No 25 Platoon.
Outstanding footballer (Amateur player for Aston Villa).
Joined the Army in 1939 and was posted to 2 Ox & Bucks (52nd) in 1942.
Killed leading his platoon over Pegasus Bridge (first allied officer to be killed on D-Day).
Recommended for posthumous MC, awarded Mention in Despatches.
Brotheridge was the inspiration behind the sculpture commissioned by the D-Day Story Museum and created by Welsh artist Alfie Bradley to mark the 75th anniversary year of D-Day and as a tribute to those who lost their lives.

Lieutenant (later Major) Smith, MC, aged 22
Outstanding cricketer.
Commissioned in 1942 and posted to 2 Ox & Bucks LI (52nd).
Wounded during the assault on Pegasus Bridge and evacuated to the UK.
Awarded the MC.
Re-joined the 52nd and took part in an air assault on the Rhine Crossings in 1945.
Promoted to Major.
Passed away in 1993.

Lieutenant (later Colonel) Wood, MBE, aged 20
Commissioned in 1942 and posted to 2 Ox & Bucks LI (52nd).
Severely wounded during the assault on Pegasus Bridge and evacuated to the UK.
Pursued an active military career until retirement as Colonel in 1978.
Awarded MBE in 1961 and French Legion of Honour in 2004.
Passed away in 2009.

Lieutenant (later Colonel) Sweeney, MC, aged 25
Commissioned in 1941 and posted to 2 Ox & Bucks LI (52nd).
Took part in the capture of the bridge over the River Orne.
Awarded the MC for gallantry the following day.
Engaged in air assault on Rhine Crossings in 1945.
Served operations in Palestine, Cyprus, Brunei and Borneo.
Twice mentioned in despatches.
Retired in 1974 to run Battersea Dogs Home.
Passed away in 2001.

Sourced from and credited to RGJ Museum Facebook. (unknown author) 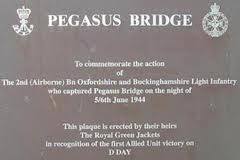 As the first day of the landings closed, more reinforcements arrived as part of Operation Mallard, they included the rest of the 2nd Ox & Bucks. Lieutenant Colonel Mark Darell-Brown DSO replaced Lieutenant Colonel Michael Roberts who had been injured during the landings and remained in command of the Battalion during the defence of the Ardennes and on the Rhine landing. On 7 June the Battalion captured the small village of Herouvillette and then headed for the village of Escoville where they met some extremely determined resistance. Having experienced intense fighting with German troops supported by armour and unable to successfully dig in and hold the village, the Battalion withdrew, moving back to Herouvillette where they took part in its defence. The Battalion subsequently held the line at Chateau St Come on Bréville ridge until August, then taking part in the British breakout and advance to the Seine that began in August, known as Operation Paddle. The Battalion crossed the River Touques and the advance continued through St Philibert, La Correspondance, Pretreville and Malbortie. On 25 August the Battalion was ordered to attack and capture the village of Manneville La Raoult, where a German Garrison was based. After heavy fighting, during which the enemy used mortar and artillery fire, by nightfall the Battalion had occupied the village and had captured a number of prisoners and transport. Lieutenant Freddie Scott was awarded a Military Cross for action which drove the enemy from a position from where his platoon had come under heavy attack by machine-gun fire and grenades. The battle for Manneville La Raoult was to be the last battle the Battalion fought in France. The following day, the Battalion moved to Foulbec. The 2nd Ox & Bucks, along with the rest of 6th Airborne, was withdrawn to the UK in early September to recuperate and reorganise. By then, of the original 181 men that had taken part in the Pegasus and Horsa operation, just 40 remained fit for active duty. The 2nd Ox and Bucks and the rest of the 6th Airborne were then rushed back to Belgium, by sea and land, to take part in the defence of the Ardennes, after the German invasion on 16 December. By the time the Battalion arrived in the Ardennes the German offensive had lost its momentum. One of its companies was involved in heavy fighting whilst in support of 13 Parachute Battalion in the village of Bure. The 2nd Ox and Bucks remained in the Ardennes until 24 January. The Battalion then moved 200 miles north to the River Maas, near Venlo, in Holland to defend the position there, before returning to the UK in late February.

The 2nd Ox and Bucks were once again involved in a gliderborne air assault landing, known as Operation Varsity, the objective of which was to cross the Rhine. Operation Varsity, which began on 24 March 1945, was the last major battle on the Western Front during the Second World War. The 2nd Ox and Bucks landed further east than any other British Army unit to capture bridges from the Germans. The Battalion, like many others during the assault, suffered heavily as the Germans met the landing gliders with ferocious fire in the air and on the ground, suffering hundreds of casualties. The 2nd Ox and Bucks casualties included 103 killed during the battle of the landing area. The Battalion had lost half its strength, companies were severely depleted and non commissioned officers were frequently required to act as platoon commanders. It saw very heavy fighting at Hamminkeln, where its objectives were the railway station and bridges over the River Issel between Hamminkeln and Ringenburg. Lieutenant Hugh Clark led a bayonet charge to take a road bridge for which he was awarded a Military Cross. CSM John Stevenson was awarded the Distinguished Conduct Medal for defeating several enemy attacks with a platoon he commanded on the east bank of the River Issel. The 2nd Ox and Bucks captured and held all its objectives. The Germans launched a number of counter-attacks, all of which were repelled. The Battalion subsequently took a leading part in the 300 mile advance across Germany, mostly on foot, including taking part in the opposed crossing of the Weser and eventually linking up with the Russians near the Baltic port of Wismar on 3 May 1945. The Battalion was selected to represent the British Army in providing the Guard of Honour for the meeting between British commander Field Marshal Montgomery and his Russian counterpart, Rokossovsky, at Wismar on 7 May 1945. 1,408 officers and other ranks of the Oxfordshire and Buckinghamshire Light Infantry lost their lives during the Second World War.

Sourced from Wikipedia and You Tube.