As a general officer, Parker served in Northern Ireland as well as in Sierra Leone, Iraq, Afghanistan and in staff roles including Governor of Edinburgh Castle, Also commandant of Joint Services Command and Staff College and commander of regional forces, a role that also gave him the duties of inspector-general of the Territorial Army. Between 2005 and 2006. Parker served as deputy commanding general of multi-national force Iraq, before appointment to General Officer Commanding, Northern Ireland, in which role he had the responsibility of overseeing the withdrawal of troops from the streets of Northern Ireland for the first time in over 30 years.

While on holiday in 2009, Parker and his wife received news that their son, Harry, a captain with The RIFLES, had been seriously wounded in Afghanistan. Harry eventually lost both legs as a result of his injuries from a road side bomb attack while leading his patrol.

Parker later gave interviews about the ordeal the family went through with his sons Harry`s injuries, calling the whole experience ” foul “. Later the same year Parker himself deployed to Afghanistan on a 12 month tour, becoming commander of the British forces of the country and deputy commander of the International Security Assistance Force, second in command to American General Stanley A, Mc Chrystal. In June Mc Chrystal was relieved of his command  of ISAF by President Barack Obama, leaving Parker as acting commander of ISAF for just over a week until General David Petraeus was confirmed as the new commander.

Parker, was born the son of Captain Herbet Blake Parker and Diana Katherine Barnwell, Parker was educated and attended the independent Sherbourne School in north-west Dorset and the Royal Military Academy, Sandhurst, he has listed Coronation Street and fishing amongst  his interests.

Parker was commissioned into the Royal Green Jackets as a second lieutenant in January 1974, he was promoted to full lieutenant in November 1975. He was mentioned in despatches in January 1980 for service in Northern Ireland the previous year and promoted captain in May 1980. He attended the Army Staff Course in 1986 prior to promotion to Major in October the same year.

He was promoted to lieutenant Colonel in 1991, he was subsequently appointed to Commanding Officer of the second battalion of  the Royal Green Jackets from 1994 to 1995 before promotion to Colonel in 1996, having attended the Higher Command and Staff Course at the Staff  Collage, Camberley. Parker was promoted to Brigadier in December in 1997, with seniority from 30th June 1997 and given command of the 20th Armoured Brigade, which deployed to Bosnia 1999.

Parker served as commander of the British task force in Sierra Leone and advisor to the country`s president in 2001 and went to become General Officer Commanding, 2nd Division in November 2002, being promoted to major general on the same date. As General officer Commanding 2nd Division, he was also Governor of Edinburgh Castle.

In 2004 he served as Commandant of the joint Services Command and Staff Collage, before taking over as Deputy Commanding General of the Multi-National Corps, Iraq, holding the position from August 2005 to February 2006.

Parker was appointed General Officer Commanding Northern Ireland and promoted to the rank of lieutenant-general on the 18th July 2006. In Northern Ireland he was responsible for reducing the UK`s troop commitment in the Province and is quoted as saying “that the military had made a significant contribution to security in Northern Ireland that has allowed other people to make the difference through politics, social programmes and economics”. Parker oversaw the closure of the base at Bessbrook, County Armagh, which, he said, “signifies a time when the army stops being part of the security forces and moves into being part of the community.

Parker was awarded the American Legion of Merit “in recognition of gallant and distinguished services during coalition operations in Afghanistan” in 2007. In October 2007, he became Commander of Regional Forces at Land Command, a dual-hatted role as Inspector-General of the Territorial Army in which role he advocated for the TA and the regular Army to be regarded as a single organisation, pointing out that both face identical risks on deployment and saying “the TA soldier brings maturity and a wider understanding of the world — the end result, more so now than ever before, is the one Army and everyone should feel part of the same team”. As Commander, Regional Forces, Parker was responsible for overseeing the £3 billion overhaul of the Army’s Royal Engineer`s Royal School of Military Engineering in a public-private partnership in September 2008 as well as accepting the Freedom of the City of Bath on behalf of The Rifles in October 2008, and campaigning for the creation of an Armed Forces Day for the UK, a proposal that was implemented in July 2009.

In September 2009, it was announced that Parker would succeed Royal Marine Lieutenant General Sir Jim Dutton as Deputy Commander of ISAF in Afghanistan. During his tenure as deputy commander, Parker denied claims that British personnel in Afghanistan were suffering from a lack of equipment and helicopters, saying in an interview “rather than asking for more helicopters — which may be a requirement – we’ve got to develop tactics that get you out and amongst the people and re-establish ourselves as a force for good in the community” and that he was “absolutely convinced that what Harry (Parker’s son) was given was right for what he was doing. However, nothing was ever going to stop his leg getting blown off”. Parker was serving in Afghanistan on Christmas Day 2009 and undertook a tour of British bases in the area to visit troops.

On 23 June 2010, Parker assumed temporary command of all 140,000 NATO troops in Afghanistan, following the departure of American General Stanley Mc Chrystal. British Prime Minister David Cameron told U.S. President Barack Obama that Parker had assured him that the operation would “not miss a beat” during the transition period. He held the role until 3 July, General David Petraeus was confirmed as Mc Chrystal’s replacement.

On 29 July 2010 Parker was named as the next Commander-in-Chief, Land Forces in succession to General Sir Peter Wall.

Parker took over as Commander-in-Chief Land Forces on 1 October 2010 and was granted the substantive rank of general. For his service in Afghanistan, General Parker was presented with his NATO ribbon by the overall allied commander in Afghanistan, US General David Petraeus, in addition to this Petraeus also presented General Parker with a US Meritorious Service Medal; furthermore Parker also received the Afghan President’s Award from its Minister of Defence.

n 1979 he married Rebecca Clare Wellings: they have two sons, one of whom, Harry, was seriously injured in July 2009 while serving as a captain with 4 Rifles in Afghanistan. Harry lost both legs after the patrol he was commanding ran over a roadside bomb. Parker later spoke about the aftermath of the incident, saying “it was pretty bad at that stage: they didn’t know if Harry would survive or not. It helped being a soldier because all your training is about remaining as calm and calculating as you can in very difficult circumstances. But it was foul.” Harry was injured shortly before Parker was due to take up the position of deputy commander of the International Security Assistance Force, but Parker took up the post on schedule, later saying in an interview “Harry would be horrified if I didn’t go. He’d think I was a wimp”. 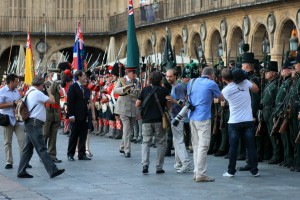 Parker inspecting the re-enactment troops for the

200th Anniversary of the Battle of Salamanca 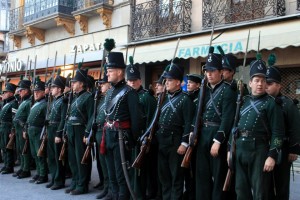 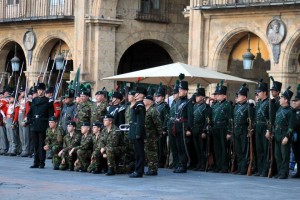 Parker is also the President of the Peninsular War 200 Group