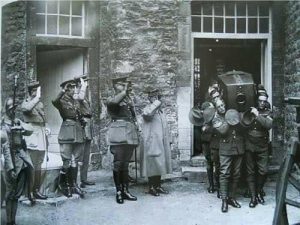 The idea of a Tomb of the Unknown Warrior was first conceived in 1916 by the Reverend David Railton, who, while serving as an army chaplain on the Western Front, had seen a grave marked by a rough cross, which bore the pencil-written legend ‘An Unknown British Soldier’.

He wrote to the Dean of Westminster in 1920 proposing that an unidentified British soldier from the battlefields in France be buried with due ceremony in Westminster Abbey “amongst the kings” to represent the many hundreds of thousands of Empire dead. The idea was strongly supported by the Dean and the Prime Minister David Lloyd George.

On September 7th 1920, in strictest secrecy four unidentified British bodies were exhumed from temporary battlefield cemeteries at Ypres, Arras, the Asine and the Somme.

None of the soldiers who did the digging were told why. The bodies were taken by field ambulance to GHQ at St-Pol-Sur-ter noise.

There the bodies were draped with the union flag. Sentries were posted and Brigadier-General Wyatt and a colonel gell selected one body at random.

A French honour guard was selected, and stood by the coffin overnight. In the morning of the 8th (a specially designed coffin made of oak from the grounds of Hampton Court, was brought and the unknown warrior placed inside.

On top was placed a crusaders sword and a shield on which was inscribed ‘( a British Warrior who fell in the GREAT WAR 1914-1918 for king and country’.

On The 9th of November the unknown warrior was taken by horse drawn carriage through guards of honour and the sound of tolling bells and bugle.

Calls to the quayside. There it was saluted by Marechal Foche and loaded onto HMS Vernon bound for Dover….. the coffin stood on the deck covered in wreaths and surrounded by the French honour guard.

On arrival at Dover the the unknown warrior was greeted with a 19 gun salute, normally only reserved for field marshals. He then traveled by special train to Victoria Station London.

He stayed there overnight and on the morning of the 11th of November he was taken to Westminster Abbey where he was placed in a tomb at the west end of the nave – his grave was filled in using 100 sandbags of earth from the battlefields.

When the Duke of York (later King George VI) married Lady Ellizabeth Bowes Lyons in the Abbey in 1923 she left her wedding bouquet on the grave as a matk of respect (she had lost a brother during the war) Since then all royal brides married in the Abbey have sent back their bouquets to be laid on the grave.

The idea of the unknown soldier was thought of by a Padre called David Railton who had served at the front during the great war and it was the union flag they used as an altar cloth at the front, that had been draped over the coffin.
It is the intention that all relatives of the 517,773 combatants whose bodies had not been identified could believe that the unknown warrior could very well be their lost husband, Father, brother or son. 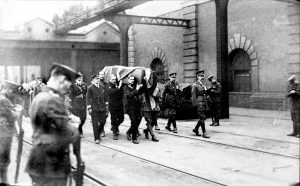 The arrival of the unknown warrior at the Port of Dover on 10th November 1920
Picture by Dover Mercury. 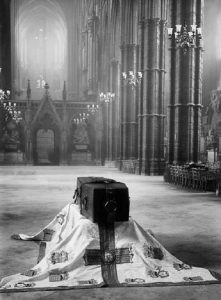 A haunting picture taken by Horace Nicholls, 2 years after the end of World War One. He was granted special access to Westminster Abbey to photograph the coffin of The Unknown Soldier, an unidentified British soldier killed on the battlefields of Northern France and brought back to the UK to represent the multitudes who died ‘For King and Country’. Horace lost his eldest son on the Western Front.
‘Rest In Eternal Peace and Tranquillity’.
With compliments to Linda Conner.