The Rifles (RIFLES) is an infantry regiment the British Army. Formed in 2007, it consists of five regular and two territorial battalions, plus a number of companies in other TA battalions, Each battalion of the Rifles was formerly an individual battalion of one of the two large regiments of the Light Division [with the exception of the 1st Battalion, which is an amalgamation of two individual regiments]. Since formation the regiment has been involved in combat operations, first in the later stages of the Iraq War and currently in the War in Afghanistan.

The Rifles was created as a result of the Future Army Structure. Under the original announcement, the Light Division would have remained essentially unchanged, with the exception of the Light Infantry gaining a new battalion through the amalgamation of two other regiments, and both gaining a TA battalion. However, on the 24th November 2005, the Ministry of Defence announced that the four regiments would amalgamate into a single five-battalion regiment. The Rifles was formed on the 1st of February 2007 by the amalgamation of the four Light Infantry and Rifle Regiments of the Light Division:

As a rifle regiment, a private soldier in The Rifles is known as a Rifleman and Serjeant is spelt in the archaic fashion; the regiment wears a Rifle green beret. A number of golden threads have been brought into the new regiment from each of its founder regiments:

Back Badge – the badge worn on the back of headdress reads Egypt. This was awarded as an honour to the 28th Foot and subsequently worn by the Royal Gloucestershire, Berkshire and Wiltshire Light Infantry. It is worn on the forage cap and side hat; and on the shako of the regimental band and bugles.

Bugle Horn – the bugle horn badge of the Light Infantry, now surmounted by St. Edward’s Crown, is the regiment’s cap badge.
Maltese Cross – the Maltese Cross of the Royal Green Jackets is worn as a buckle on the cross belt, and will contain the regiment’s representative battle honours; currently one space is kept free for future honours. In accordance with the tradition of rifle regiments, the regiment does not carry colours.

Black Buttons – the traditional black buttons of a rifle regiment are worn on all forms of dress with the exception of combat dress.
In addition, the new regiment’s “Double Past” march (the music used when marching past at the double) is an amalgam of the Light Infantry’s (Keel Row) and the Royal Green Jackets’ (Road to the Isles). In addition to the uniform distinctions the Rifles march at a faster pace than the rest of the infantry, 140 paces per minute rather than 120.(RGJ 160 ppm DLI 140 ppm).

The regiment has 5 regular and 2 Territorial Army battalions, each configured for a specific infantry role:
1st Battalion, an amalgamation of the 1st Battalion, Devonshire and Dorset Light Infantry and the 1st Battalion, Royal Gloucestershire, Berkshire and Wiltshire Light Infantry. Configured in the light role the Battalion was attached to 3 Commando Brigade as a fourth manoeuvre unit alongside three Commandos of Royal Marines. Personnel are based at Beachley Barracks, Chepstow. Under Army 2020, it has moved from 3 Commando Brigade to the Army’s 160th Brigade.

2nd Battalion, a redesignation of the 1st Battalion, Royal Green Jackets and was configured in the light role as part of 19 Light Brigade. Personnel are based at Abercorn Barracks, Ballykinler. In the future, it will fall under 38th Brigade.

3rd Battalion, a redesignation of the 2nd Battalion, The Light Infantry and configured in the light role as part of 52nd Infantry Brigade. Personnel are based at Redford Barracks, Edinburgh. Under Army 2020, it will be mounted on Foxhound/Bulldog vehicles and be part of the Adaptable Force under 51st Infantry Brigade.

4th Battalion, a redesignation of the 2nd Battalion, Royal Green Jackets and configured in the mechanised role as part of 1 Mechanised Brigade. Personnel are based at Kiwi Barracks, Bulford. Under the Army 2020, concept, this battalion will be mounted on Mastiff vehicles.
5th Battalion – redesignation of the 1st Battalion, The Light Infantry and configured in the armoured role as part of 20th Armoured Brigade. Personnel are based at Alanbrooke Barracks, Paderborn, Germany. It will remain as a Warrior battalion under Army 2020.
6th (V) Battalion – redesignation of the Rifle Volunteers with sub-units at Gloucester, Taunton, Dorchester, Truro and Exeter. Under Army 2020, it will be under 160th Brigade and paired with 1 RIFLES.

7th (V) Battalion – redesignation of the Royal Rifle Volunteers, minus the Princess of Wales’s Royal Regiment company, plus the Royal Green Jacket companies of the London Regiment (the descendants of the 4th (V) Battalion the Royal Green Jackets). The Battalion has sub-units at Abingdon, Reading (Brock Barracks), Milton Keynes, Mayfair, West Ham, High Wycombe, Swindon, Windsor and Aylesbury. Under Army 2020, it will be under 38th Brigade and paired with 2 RIFLES.

In addition to the seven battalions above, a further two companies are also cap badged as The Rifles but are attached to other TA infantry Battalions:
D (RIFLES) Company, 5th (V) Battalion Royal Regiment of Fusiliers (includes Y (RIFLES) Platoon), a redesignation of C (Light Infantry) Company, Tyne-Tees Regiment and Minden (Light Infantry) Company, East and West Riding Regiment. Designated to reflect the historic relationship with Durham, and Yorkshire, the Company has a presence at Bishop Auckland, Consett, Sunderland, Washington, Doncaster and Pontefract.

E (RIFLES) Company, 4th (V) Battalion, Mercian Regiment, a redesignation of E (Light Infantry) Company, West Midlands Regiment, based at Shrewsbury.
Approximately one third of all cadets now wear The Rifles cap badge. There is one Combined Cadet Force unit that still carries the RGJ cap badge and that is Pangbourne College, Berkshire.

The Band and Bugles

In addition, the two TA Battalions maintain their own bands:

In the period 1968-1970, the Drum & Bugle Corps had a particularly active period beating retreat in places such as Honiton Barracks (then home of one of the Light Infantry Battalions), Ottery St Mary, Sidmouth and in Taunton itself, where for two years it was given permission to form up and then marched from Kings Taunton to the St Mary Magdalene Church in the town centre to participate in the Annual Remembrance Day services where it was one of the bands that led the parade. The Drum & Bugle Corps consisted of 12 side drummers, two tenor drums, a bass drum, a cymbals player and 12 buglers.

The following battle honours are a representation of the total honours awarded to the regiments which formed The Rifles. These are inscribed on the regiment’s belt badge:

Linage to The Rifles 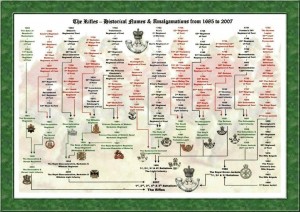 Sourced unknown chart from the www.