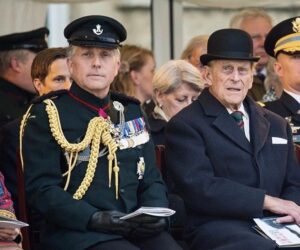 Colonel-in-Chief of The Rifles

Pictured with Sir Nick Carter, Chief of the Defence Staff at the Sounding Retreat 2016. 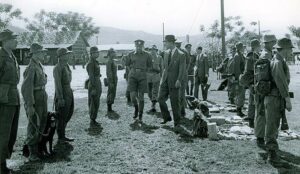 HRH The Duke of Edinburgh, inspecting a Company of  the 1st Battalion the Rifle Brigade (1RB) at Kuala Lumpur, 1st November 1956, he also met with a some families of warrant officers and senior NCO`s  in the Battalion. The Rifle Brigade a antecedent Regiment of The Rifles 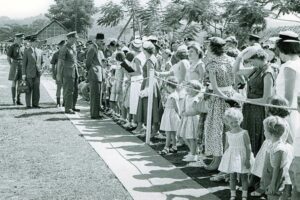 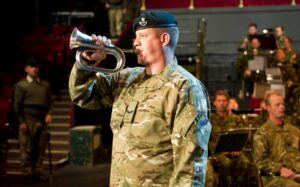 A bugle appears on the cap badge of The Rifles. The Regimental band is the ‘Band and Bugles of The Rifles’. Bugles play an important part in the modern Regiment and the antecedents of the past. But where do bugles come from and why are they so important to The Rifles?

In the 17th and 18th century, most line infantry regiments used drums to send orders on the battlefield. However, for light troops, operating in difficult terrain, such as thick forests, drums were too bulky and impractical. In the early to mid-17th century, various German states established units of light troops, known as jägers (‘hunters’). They were often recruited from among the middle class and minor nobility, as these men were experienced hunters and could afford to buy their own rifles, which were rare and extremely expensive at the time. Jägers would communicate with each other over long distances with hunting horns. These were very simple instruments, often constructed from curved animal horns or tusks. Hunting horns were sometimes known as bugles, coming from the Latin for bullock (‘buculus’), as bull’s horns were often used. Horns of this type had been common across Europe since at least the Middle Ages.

By the early 18th century, as German jäger units were becoming more standardized, hunting horns started to be replaced by large, brass, curved bugles, known as halbmondbläser (‘half-moon bugles’). The British Army first adopted bugles in 1756, during the Seven Years’ War, when British troops were fighting side by side with various German allies in Europe. These took the form of what we would think of today as a bugle – a curled brass tube, without valves, ending in a funnel-shaped mouth.

During the same period, the 60th (Royal American) Regiment had been raised and, along with other irregular ranger units, were operating in the Canadian wilderness. Many of the officers were German and Swiss, who began instructing the 60th in the ways of irregular warfare. The use of hunting horns, easily obtainable, were incorporated into their tactics.

Although a more modern design of the bugle had now been adopted by the British Army, the symbol of the earlier hunting horn became synonymous with light infantry and rifle units. Consequently, with the formation of the Experimental Corps of Riflemen in 1802, they adopted the bugle as their cap badge. Bugles, of various designs, would go on to feature on the cap badges of many of the antecedent regiments of The Rifles. These included the Somerset Light infantry, Durham Light Infantry, King’s Own Yorkshire Light Infantry and the Royal Green Jackets, to name just a few. Today, of course, it can be seen on the cap badge of The Rifles.

Bugles remained in use in the British Army throughout the 18th and 19th centuries, and into 20th century. They were last carried into combat by British troops in the First World War. Although today their battlefield use has been overtaken by more modern technology, they remain a feature of life in The Rifles, for example in the Band and Bugles of The Rifles, on parade and for special ceremonial purposes.

Today the bugle serves as a symbol in The Rifles of a way of warfare that is flexible, forward thinking and quick on its feet – just like the hunters who once carried them!

An example of an early 18th century German halbmondbläser (‘half-moon bugles’), one of the predecessors of the modern bugle.

A Medieval hunting scene, as depicted in ‘Livre de Chasse’ – a treatise on hunting, written by Gaston III, Count of Foix, in 1387. Note the hunting horns being used by the mounted figures in background and the hunter on foot in the foreground.

Pictures credited to the rifles Museum