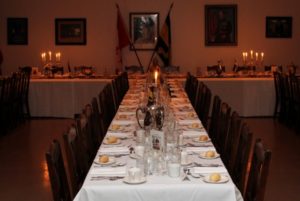 How often have we heard that toast and how little have we thought of its origin, development and variations. In fact, why do we drink a toast at all, and in doing so what significance has it? Let us then attempt to briefly trace its origin, development and variations through the years. It was the custom in Ancient Greece and Rome to drink libations to the gods and later when mortals qualified for this honour a toast “This to thee” was proposed and the cup handed to the person so honoured. This is probably the origin of our custom of raising the wine glass when drinking a toast. “Health drinking” was a great and favoured pleasure of the Saxons and later when the habit was turned, by monks, into more or less of a religious custom, the wussail bowl became known as the poculum caritatis or loving cup. In some parts of England, and particularly Scotland, it is still known as the “grace cup”. This term was given to a bowl of wine passed around by the hostess to induce guests to remain seated until grace was said after the meal.

In the 17th Century when loyalty to the Sovereign was somewhat divided, officers were ordered to drink the King’s health as a sign and token of their devotion. To salve their consciences, the Jacobites and their sympathizers used to place their glasses over their finger bowls and so drink “To the King over the water”, meaning, of course, the exiled House of Stewart. To avoid this insult, and up until the reign of Edward VII, finger bowls were not permitted in Officers’ Messes. It might be interesting to add at this point that George IV, when he was Prince Regent, introduced the Regent’s allowance to assist poorer officers in meeting their wine and liquor bills. This custom held good until 1919 when the Pay and Allowance Regulations for the British Army were revised. There are many ways in which the Queen’s health is, and may be, drunk. Once they were drunk on bended knee, and, in Scotland, with one foot on the table and one on the chair. In some messes this may still be seen, particularly Highland messes, and the custom is referred to as Highland honours.

The usual procedure, however, is to have the wine passed around the table to the right left and the last glass to be filled is that of the Commanding Officer. This is done so that he will know that every officer has got his glass filled and is ready for the toast. The Commanding Officer then gives the signal and the Mess President rises, saying “Mr. Vice – The Queen”. The “Vice”, who is generally the most junior officer in the Mess and who is seated at the foot of the table, rises and seconds the toast, saying “Gentlemen – The Queen”. All officers then stand, raise their glasses, and respond. The toast is drunk, and after a slight pause, taking the time from the President, the officers sit down. If the Regimental band is in attendance, the officers stand while the first six bars of the National Anthem are played, holding their glasses in the meantime. The toast is then drunk after the band has finished playing. It is at this point that I would like to point out the variations and customs that have crept into the toast. In some Regiments all officers respond to the toast by saying “The Queen, God bless her”; in others only field officers may respond, and in a few the officers remain silent. In some messes the custom is to drink “no heel taps”, that is, a bumper glass (brim full) drained at one swallow. The expression “heel tap” came from the reference to one thickness of leather making up the heel of the old boots. Some Regiments do not drink the toast at all and others drink it only on special occasions; some – and indeed most Regiments stand for the toast, some remain seated, only the President and Vice President standing, and others remain seated throughout.

I will, a little later on, give examples of these various deviations from the normal and quote, if possible, the incident that gave rise to the custom. However, before doing so I would like to state that as far as the Canadian Army is concerned any deviation from the normal method of toasting the sovereign is a result of affiliation with a British Army unit that observes some custom. However, many Canadian Regiments observe special days of remembrances and it is possible that some custom has been carried on that as a result of usage has become a tradition of the Regiment. The following are some examples of the deviations by Regiments of the British Army, together with the reason for the custom which has now become tradition. The Royal Navy and Royal Marine Regiments remain seated during the toast while they are afloat. This custom arose from the fact that years ago wardroom ceilings were so low that it became quite a game to avoid hitting the beams and to avoid a loss of dignity inherent with the dodging and darting, officers were permitted to remain seated.

Some line Regiments of the British Army have during their period of existence served as Marine regiments and to commemorate the occasion remain seated during the toast. The Rifle Brigade remain seated because their loyalty has never been questioned. The King’s Own Shropshire Light Infantry do not drink the toast and this arose from an incident in Brighton in 1821. During the course of a Regimental dinner, at which King George IV was a guest, he declared that, as a result of the actions of the officers in dispersing some rioters who threatened him while he was attending the theatre in Brighton “Such loyal gentlemen as these need never drink the King’s health or stand while the anthem is being played”. During the reign of Victoria, the Scots Guards remained seated during the toast, except for the President and Mr. Vice. Those seated drank the toast in silence. In the Royal Tank Regiment the toast is drunk in the normal manner however, the words “God Bless her” are optional to everyone. On guest nights the Gordon Highlanders drink the toast in silence. Unless a member of the Royal family is present the 17/21st Lancers do not drink the toast, and in the Oxfordshire and Buckinghamshire Light Infantry it was the sentiment that “it was wrong and unregimental to parade loyalty; a thing to be taken for granted”. Consequently the toast is not drunk. The list is almost endless and it is safe to say that no two regiments do the honours in precisely the same manner. Like life, where variety is the spice, so tradition and custom make mess life unusual and interesting. What a grasp tradition and custom have become, how rigid and persistent.

The article “Gentlemen – the Queen!” in the May 1952 edition of the Journal contains some points which invite comment. The author refers more than once to the “usual procedure” but one is left in some doubt as to just what this procedure is. He states “the wine is passed around the table to the right and the last glass to be filled is that of the Commanding Officer.” Many variations in the procedure for the loyal toast do exist among the regiments of the British Common wealth, but I venture to believe that in no mess is the wine passed “around the table to the right”.

Further, it is a rare occasion when the Commanding Officer is the last officer to fill his glass. The most common procedure is for the Commanding Officer to be seated in the centre of the table on the side nearest the main entrance to the dining room, with the President at the right and the Vice at the left end, respectively. Actually, the President can be seated anywhere, i.e. from where he can best supervise the table and the service. The wine decanters are placed in front of both the President and the Vice and on a signal from the former both taste it to “assure those present that it is fit to drink”. The wine is then passed “to the left” and the Commanding Officer fills his glass in turn. In large messes where two or more tables may be in use, some local variations of this procedure undoubtedly will exist, but the general form remains the same. For example, the Commanding Officer rather than the President may propose the toast, and at extra long tables decanters may have to start being passed from several points, but these are just more of those deviations mentioned in the article.

The author also infers that Canadian regiments or units allied to British take on the traditions of the latter. This is a misconception prevalent among Canadians and devoutly to be discouraged. No Canadian regiment would consider adopting the battle honours of its allied British regiment, yet regimental traditions, customs or quiffs are usually honours won long ago on the field of battle or distinctions awarded by a reigning sovereign or other high personage. The person who granted the tradition in the first instance is now hardly in a position to permit its delegation to another regiment. To request authority to adopt one or more of these “honours” may prove embarrassing to the British regiment and to adopt without sanction would be Regimental Marched even more embarrassing to the Canadian regiment. In essence, therefore, Canadian regiments should earn their own traditions.

Sourced and Credited from the Regimental Rogue