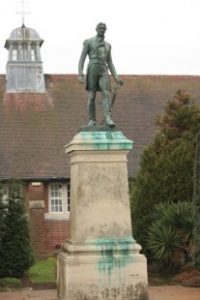 Every donation that comes to the Trust, is used to promote our aims. We are a ‘work in motion’, striving to find innovative ways of raising funds and awareness, whilst promoting education.  With your donation we can begin to secure the future of the heritage now.

We also aim to educate the public, in the history of the military and the social impact of military history by the provision and maintenance of a museum.

Why we began this mission

The site encompasses over 200 years of military, social and cultural history.  The Trust intends to tell the story of Shorncliffe (and the men and women who trained and lived there) from its earliest days defending Britain against invasion, to its role in the birth of the modern army through the role of Sir John Moore, it’s extension through the Victorian period to the Edwardian and the First and Second World war and beyond to the modern day role of The Brigade of Ghurkha’s.  We aim to mark this year, 2014, being the centenary of the commencement of the First World War, by securing the Shorncliffe Redoubt and begin the task of regenerating the site into a world class heritage and education centre.

In 2013 the Ministry of Defence moved forward their plans to sell off part of Shorncliffe Camp and training grounds. Their preferred purchaser is Taylor Wimpey who are planning to build up to 1200 homes on the site, as well as demolish the original military buildings that are not listed by English Heritage or the redoubt which is an ancient scheduled monument Therefore the Trust has stepped up its campaign to take over the management and redevelopment of the site. A Board of Trustees was set up and patrons recruited to the cause. The time has now come for the current owners, developers and stakeholders to make a decision on the future and legacy of the heritage and park land.

The Trust wants to utilise existing military buildings to convert them into an education centre, museum, heritage reference library, café, craft centre and open the park land to be accessible to visitors. Its goal is to protect the archaeology on the site which includes the 200 year old Napoleonic redoubt, Victorian pistol & rifle range, WW1 trenches used for training and WW2 defences such as spigot mortar post, pillboxes and underground bunkers.

The Shorncliffe Trust is currently working towards creating the UK’s first Heritage Park & Education Centre dedicated to the history and legacy of the modern British Army.

Shorncliffe has been on the frontline of this country for over 200 years and has a unique history that is tied into world history events from the Napoleonic wars through to World War II. It is rare to find one military site in the world that has influenced and changed so much about the way today’s soldiers fight and operate on battlefields in the 21st century.

The centre at Shorncliffe will examine its military history and the impact (both social and cultural) the army camp made over the centuries both locally and internationally.

Shorncliffe has welcomed different nationalities from around the world and, in this corner of Kent, hosted royalty and leaders from a variety of nations.

To achieve their goal, the Shorncliffe Trust is working on plans to regenerate the old training grounds and set up a dedicated Heritage Park and Education Centre on redundant ex-MOD land, incorporating neglected heritage assets and bring them to life for the local community, and attracting visitors from around Britain and overseas.

The Shorncliffe Trust aims to raise £3 million through donations, grant applications, as well as through specific high profile events. Shorncliffe needs to raise an initial fund to secure the leasing of the land, set-up expenses and short-term operational costs.

Without your help there might not be a future. Support us in any way you can to save this important site – Make History, Save History.

We are approaching patrons and supporters of British Military history and heritage to become donors to the charity. We are currently working with commercial stakeholders such as tourism and travel companies who are promoting and creating income for the Trust.

‘Shorncliffe is a precious piece of the larger “mosaic” that makes up British History.  Anyone that values history must see the importance of preserving Shorncliffe. It’s about heritage and it’s about respecting the efforts of those who toiled tirelessly- and continue to toil tirelessly- on  our behalf, preserving, not only our nations “present” but also its “past”.’

Christopher Summerville – Historian and Author of “March of Death”

The Shorncliffe Trust is regularly sought after on a consultancy basis and have many projects they have assisted on.

The Kingdom of Jordan Tourism Board

The Belgian Tourist Board.

To hire us as consultants or for enquiries about hiring historical interpreters in the first instance contact:

For research enquiries or to enquire about the purchase of copies of images in the first instance contact:

Chris has a background in audio-visual, but has dedicated himself to the preservation of Shorncliffe since 2005, in the process becoming an acknowledged expert on Shorncliffe and the Napoleonic Wars, joining the prestigious Peninsular War 200 Committee.  He is consulted internationally on military subjects, both academic and in organising events.

Des is a Qualified Accountant who runs his own practice in Ramsgate in Kent. Prior to running his own business he worked for several large organisations in London in various Accounting roles. Des also has a BA in Archaeology from the University of Kent and is currently finishing his MA in 20th Century Conflict Archaeology.

Sue was Secretary of initially The Shorncliffe Redoubt Preservation Society, now The Shorncliffe Trust since 2007 to the present, and a Trustee since early 2013, helping maintain communications, carrying out research and supporting the Chairman and Trustees in the day to day running of the Trust.

Interested in history since childhood, educated to degree level obtaining a BA (Jt) Hons. Applied Social Policy and Sociology in 1992, and also an experienced family historian achieving the Higher Certificate in Genealogy awarded by the Institute of Heraldic and Genealogical Studies Canterbury 2012.

Vince was treasurer of the Shorncliffe Redoubt Preservation Society from 2007-2013, currently supporters organizer and Trustee of the Shorncliffe Trust. Educated to degree level with a B.Sc. in mathematics 1996 and Senior Database analyst, expertise in Information Technology.

Traditional Tunes from the 1800’s

“The Riﬂe Corps were skirmishers in every sense of the word
a sort of Wild sportsman, and up to every description of good humour.

Nothing came amiss the very trees responded to their merriment,
scraps of their sarcastic rhymes passed current through all the camps and bivouacs. “

Over the Hills and Far Away
Maj Sharpe’s Song

Here’s forty shillings on the drum
To those who volunteer to come,
To ‘list and ﬁght the foe today
Over the Hills and far away.

Then fall in lads behind the drum
With colours blazing like the sun.
Along the road to come what may
Over the hills and far away.

If I should fall to rise no more,
As many comrades did before,
Ask the pipes and drums to play
Over the hills and far away.

Though kings and tyrants come and go
A soldier’s life is all I know
I’ll live to ﬁght another day
Over the hills and far away.

Old Wellington, he scratched his bum.
He SéyS, “Boney lad, thee’s had thee fun.”
My riflemen will win the day
Over the hills and far away.

I am a soldier, I will say,
That rambles for promotion.

I’ve laid the French and Spaniards low
Some miles across the ocean.

So now me jolly boys, I’ll bid you all adieu:
No more to the wars will I go with you;

But I’ll ramble the country through and through…
And I’ll be a rambling soldier.

The king he has commanded me
To range this country over.

From Woolwich up to Liverpool,
From Plymouth back to Dover.

A courtin’ all the girls, both old and young
With me ramrod in me hand, and me ﬂattery tongue;

To court them all, but marry none…
And I’ll be a rambling soldier.

And when these wars are at an end,
I’m not afraid to mention.

The King will give me my discharge,
A guinea and a pension.

No doubt some lasses will me blame,
But none of them will know my name;

And if you want to know the same…
It’s – the rambling soldier!

Chorus
Haul away you rolling kings
(All) heave away. haul away
Haul away, you’ll hear me sing
(All) We’re bound for South Australia

As I walked out one morning fair
(All) heave away, haul away
‘Twas there I met Miss Nancy Blair
(All)We’re bound for South Australia

Chorus
I shook her up and I shook her down
(All) heave away, haul away
I shook her round and round the town
(All)We‘re bound for South Australia

Chorus
There ain’t but one thing grieves me mind
All) heave away, haul away
To leave Miss Nancy Blair behind
(All)We’re bound for South Australia

Chorus
And as we wallop around Cape Horn
All) heave away, haul away
You‘ll wish to God you`d never been born
(All)We’re bound for South Australia.