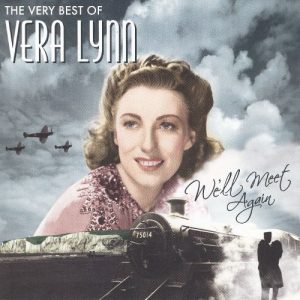 During the war she toured Egypt, India, and Burma as part of ENSA, giving outdoor concerts for the troops. The songs most associated with her are “We’ll Meet Again”, “The White Cliffs of Dover”, “A Nightingale Sang in Berkeley Square” and “There’ll Always Be an England”.

She remained popular after the war, appearing on radio and television in the UK and the US and recording such hits as “Auf Wiederseh’n Sweetheart” and her UK Number one single “My Son, My Son”. Her last single, “I Love This Land”, was released to mark the end of the Falklands War. In 2009, at age 92, she became the oldest living artist to top the UK Albums Chart.

She has devoted much time and energy to charity work connected with ex-servicemen, disabled children, and breast cancer. She is held in great affection by veterans of the Second World War to this day and in 2000 was named the Briton who best exemplified the spirit of the 20th century.

She began performing publicly at the age of seven and adopted her maternal grandmother’s maiden name, Margaret Lynn, as her stage name when she was eleven. Her first radio broadcast, with the Joe Loss Orchestra, was in 1935. At this point she was being featured on records released by dance bands including those of Loss and of Charlie Kunz.

In 1936 her first solo record was released on the Crown label, “Up the Wooden Hill to Bedfordshire”. This label was absorbed by Decca Records in 1938. After a short stint with Loss she stayed with Kunz for a few years during which she recorded several standard musical pieces. In 1937 she moved to the aristocrat of British dance bands, Bert Ambrose.

She is best known for her 1939 recording of the popular song “We’ll Meet Again”, written by Ross Parker and Hughie Charles; the nostalgic lyrics (“We’ll meet again, don’t know where, don’t know when, but I know we’ll meet again some sunny day”) were very popular during the war and made the song one of its emblematic hits.

During the Phoney War, the Daily Express asked British servicemen to name their favourite musical performers: Vera Lynn came out on top and as a result became known as “the Forces’ Sweetheart”.

In 1941, during the darkest days of the Second World War, Lynn began her own radio programme, Sincerely Yours, sending messages to British troops serving abroad. She and her quartet performed songs most requested by the soldiers.
Lynn also visited hospitals to interview new mothers and send personal messages to their husbands overseas. Her other great wartime hit was “The White Cliffs of Dover”, words by Nat Burton, music by Walter Kent.

In 1943 she appeared in the film We’ll Meet Again. Contrary to later reports, she neither sang nor recorded “Rose of England” during this time and it was only in 1966 when her producer, David Gooch, selected it for her album More Hits of the Blitz that she became familiar with it. The album itself was a follow-up to Hits of the Blitz produced by Norman Newell.

During the war years she joined ENSA and toured Egypt, India and Burma, giving outdoor concerts for the troops.

In March 1944 she went to Shamshernagar airfield in Bengal to entertain the troops before the Battle of Kohima. Her host and lifelong friend Captain Bernard Holden recalled “her courage and her contribution to morale”.

In 1985 it was announced that she would receive the Burma Star for entertaining British guerrilla units in Japanese-occupied Burma.

Lynn’s “Auf Wiederseh’n Sweetheart” in 1952 became the first record by a British performer to top the charts in the United States, remaining there for nine weeks.

She also appeared regularly for a time on Tallulah Bankhead’s US radio programme The Big Show. “Auf Wiederseh’n Sweetheart”, along with “The Homing Waltz” and “Forget-Me-Not”, gave Lynn a remarkable three entries on the first UK Singles Chart, a top 12 (which actually contained 15 songs owing to tied positions).

Her popularity continued in the 1950s, peaking with “My Son, My Son”, a number-one hit in 1954 which she co-wrote with Gordon Melville Rees. In 1960 she left Decca Records (after nearly 25 years) and joined EMI.

She recorded for EMI’s Columbia, MGM and HMV labels. She also recorded Lionel Bart’s song “The Day After Tomorrow” for the 1962 musical Blitz!; she did not appear onstage in the play, but the characters in the play hear the song on the radio while they shelter from the bombs.

In 1967 she recorded “It Hurts To Say Goodbye”, a song which hit the top 10 on the Billboard Easy Listening chart.

Vera Lynn was the subject of This Is Your Life on two occasions, in October 1957 when she was surprised by Eamonn Andrews at the BBC Television Theatre, and in December 1978, for an episode which was broadcast on 1st January 1979, when Andrews surprised her at the Cafe Royal, London.

She hosted her own variety series on BBC1 in the late 1960s and early 1970s and was a frequent guest on other variety shows, notably the 1972 Morecambe & Wise Christmas Show.

In 1972 she was a key performer in the BBC anniversary programme Fifty Years of Music. In 1976 she hosted the BBC’s A Jubilee of Music, celebrating the pop music hits of the period 1952–1976 to commemorate the start of Queen Elizabeth II’s Silver Jubilee year.

For ITV she presented a 1977 TV special to launch her album Vera Lynn in Nashville, which included pop songs of the 1960s and country songs.

The Royal Variety Performance included appearances by Vera Lynn on four occasions: 1960, 1975, 1986 and 1990.
Lynn was also interviewed about her role in entertaining the troops in the India-Burma Theatre, for The World at War series in 1974.

Lynn is also notable for being the only artist to have a chart span on the British single and album charts reaching from the chart’s inception to the 21st century – in 1952 having three singles in the first ever singles chart, compiled by New Musical Express,and most recently having a No. 1 album with We’ll Meet Again – The Very Best of Vera Lynn.

She was made an Officer of the Order of Saint John (OStJ) in 1998 and, in 2000, Lynn received a special “Spirit of the 20th Century” Award. A street named in her honour, Vera Lynn Close, is situated in Forest Gate, London.

A preserved example of the WD Austerity 2-10-0 class of steam locomotives at the North Yorkshire Moors Railway is named Dame Vera Lynn.

In 1979, on their album The Wall, Pink Floyd released a song titled “Vera”, referencing Vera Lynn and the song We’ll Meet Again with the lyrics “Does anybody here remember Vera Lynn? / Remember how she said that / We would meet again / Some sunny day?”.

In 1976 she received an honorary doctorate from the Memorial University of Newfoundland.[33] In 1977 She was made an honorary citizen of Nashville, Tennessee. She received the Freedom of the City of London in 1978.

She was made a Commander of the Order of Orange-Nassau in 1985. ?

She was appointed Member of the Order of the Companions of Honour (CH) in the 2016 Birthday Honours for services to entertainment and charity.

In 1953 Lynn formed the cerebral palsy charity SOS (The Stars Organisation for Spastics) and became its chairperson.

The Vera Lynn Charity Breast Cancer Research Trust was founded in 1976, with Lynn its chairperson and later its president.

In 2002 Lynn became president of the cerebral palsy charity The Dame Vera Lynn Trust for Children with Cerebral Palsy, and hosted a celebrity concert on its behalf at Queen Elizabeth Hall in London.
In 2008 Lynn became patron of the charitable Forces Literary Organisation Worldwide for ALL,

In 2010 Lynn became the patron of the Dover War Memorial Project, In 2010 she became patron of the British charity Projects to Support Refugees from Burma/Help 4 Forgotten Allies.

In 2013 Lynn joined a PETA campaign against pigeon racing, stating that the sport was “utterly cruel.”

Lynn sang outside Buckingham Palace in 1995 in a ceremony that marked the golden jubilee of VE Day. This was her last known public performance.

The United Kingdom’s VE Day Diamond Jubilee ceremonies in 2005 included a concert in Trafalgar Square, London, in which Lynn made an unannounced appearance.

She made a speech praising the veterans and calling upon the younger generation always to remember their sacrifice, and joined in with a few bars of “We’ll Meet Again”. Following that year’s Royal British Legion Festival of Remembrance Lynn encouraged the Welsh singer Katherine Jenkins to assume the mantle of “Forces’ Sweetheart”.

In her speech Lynn said: “These boys gave their lives and some came home badly injured, and for some families life would never be the same. We should always remember, we should never forget, and we should teach the children to remember.”?

In September 2008 Lynn helped launch a new social history recording website, “The Times of My Life”, at the Cabinet War Rooms in London.

In February 2009 it was reported that Lynn was suing the British National Party (BNP) for using “the White Cliffs of Dover” on an anti-immigration album without her permission. Her lawyer claimed the album seemed to link Lynn, who does not align with any political party, to the party’s views by association.

In September 2009, at the age of 92, Lynn became the oldest living artist to make it to number 1 in the British album chart.
Her compilation album We’ll Meet Again: The Very Best of Vera Lynn entered the chart at number 20 on 30 August, and then climbed to number 2 the following week before reaching the top position, outselling both the Arctic Monkeys and the Beatles.

In August 2014 Lynn was one of 200 public figures who were signatories to a letter to The Guardian opposing Scottish independence in the run-up to September’s referendum on that issue.
In May 2015 she was unable to attend VE Day 70: A Party to Remember, in London but was interviewed at home by the Daily Mirror.

In February 2017 it was announced that Lynn would be releasing a new LP entitled Vera Lynn 100 through Decca Records, to be released three days before her 100th birthday on 17th March 2017.

Parlophone Records, which owns Lynn’s later recordings from the 1960s and 1970s, will release a collection of her songs recorded at Abbey Road Studios entitled Her Greatest from Abbey Road on 10th March 2017, featuring five previously unreleased original recordings.

Lynn currently holds the record for being the oldest UK artist to get a top 20 album at the age of 97.