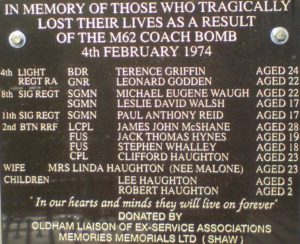 The M62 coach bombing occurred on the 4th February 1974 on the M62 motorway in northern England, when a Provisional Irish Republican Army (IRA) bomb exploded in a coach carrying off-duty British Armed Forces personnel and their family members.

Twelve people (nine soldiers, three civilians) were killed by the bomb, which consisted of 25 pounds (11 kg) of high explosive hidden in a luggage locker on the coach. Later in 1974 Judith Ward was convicted of the crime, but 18 years later the conviction was judged as wrongful and she was released from prison.

The coach had been specially commissioned to carry British Army and Royal Air Force personnel on leave with their families from and to the bases at Catterick and Darlington during a period of railway strike action.

The vehicle had departed from Manchester and was making good progress along the motorway. Shortly after midnight, when the bus was between junction 26 and 27, near Oakwell Hall, there was a large explosion on board. Most of those aboard were sleeping at the time. The blast, which could be heard several miles away, reduced the coach to a “tangle of twisted metal” and threw body parts up to 250 yards (230 m).

The explosion killed eleven people outright and wounded over fifty others, one of whom died four days later. Amongst the dead were nine soldiers – two from the Royal Artillery, three from the Royal Corps of Signals and four from the 2nd battalion Royal Regiment of Fusiliers. One of the latter was Corporal Clifford Haughton, whose entire family, consisting of his wife Linda and his sons Lee (5) and Robert (2), also died. Numerous others suffered severe injuries, including a six-year-old boy, who was badly burned.

The driver of the coach, Roland Handley, was injured by flying glass, but was hailed as a hero for bringing the coach safely to a halt.

Suspicions immediately fell upon the IRA, which was in the midst of an armed campaign in Britain involving numerous operations, later including the Guildford pub bombing and the Birmingham pub bombings.

Reactions in Britain were furious, with senior politicians from all parties calling for immediate action against the perpetrators and the IRA in general.

The British media were equally condemnatory; according to The Guardian, it was “the worst IRA outrage on the British mainland” at that time, whilst the BBC has described it as “one of the IRA’s worst mainland terror attacks”.
Irish newspaper The Sunday Business Post later described it as the “worst” of the “awful atrocities perpetrated by the IRA” during this period.

IRA Army Council member Dáithí Ó Conaill was challenged over the bombing and the death of civilians during an interview, and replied that the coach was bombed because IRA intelligence indicated that it was carrying military personnel only.

The entrance hall of the westbound section of the Hartshead Moor service area was used as a first aid station for those wounded in the blast. A memorial to those who were killed was later created there.

Following a campaign by relatives of the dead, a larger memorial was later erected, set some yards away from the entrance hall.

The Haughton family are buried in Blackley Cemetery, Manchester.

The Prosecution of Judith Ward

Following the explosion, the British public and politicians from all three major parties called for “swift justice”.
The ensuing police investigation led by Detective Chief Superintendent George Oldfield was rushed, careless and ultimately forged, resulting in the arrest of the mentally ill Judith Ward (born 10 January 1949).

Ward claimed to have conducted a string of bombings in Britain in 1973 and 1974 and to have married and had a baby with two separate IRA members.

her subsequent retraction of these claims, the lack of any corroborating evidence against her, and serious gaps in her testimony – which was frequently rambling, incoherent and “improbable” – she was wrongfully convicted in November 1974.
Following her conviction, the Irish Republican Publicity Bureau issued a statement:

Miss Ward was not a member of Óglaigh na hÉireann and was not used in any capacity by the organisation. She had nothing to do what-so-ever with the military coach bomb (on the 4th February 1974), the bombing of Euston Station and the attack on Latimer Military College. Those acts were authorised operations carried out by units of the Irish Republican Army.

The case against her was almost completely based on inaccurate scientific evidence using the Griess test and deliberate manipulation of her confession by some members of the investigating team.

The case was similar to those of the Guildford Four, the Birmingham Six and the Maguire Seven, which occurred at the same time and involved similar forged confessions and inaccurate scientific analysis. Ward was finally released in May 1992, when three Appeal Court judges held unanimously that her conviction was “a grave miscarriage of justice”, and that it had been “secured by ambush”.

If you would like to make a Donation to Memorial At Peninsula Ltd please go to our page How To Make a Donation.