Formation and The 19th Century 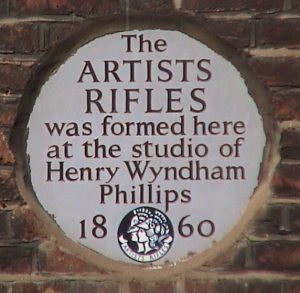 The regiment was formed in 1859, part of the widespread volunteer movement which developed in the face of potential French invasion after Felice Orsini`s attack on Napoleon III was linked to Britain. The group was organised in London by Edward Sterling, an art student, and comprised various professional painters, musicians, actors, architects and others involved in creative endeavours; a profile it strove to maintain for some years. It was established on 28 February 1860 as the 38th Middlesex (Artists’) Rifle Volunteer Corps, with headquarters at Burlington House. Its first commanders were the painters Henry Wyndham Phillips and Fredric Leighton. The unit’s badge, designed by J. W. Wyon, shows the heads of the Roman gods Marts and Minerva in profile. Until 1914 the regimental full dress uniform was light grey with white facings, silver buttons and braid. This distinctive uniform dated from the regiment’s foundation as a volunteer unit. After World War I standard khaki was the normal dress.

In September 1880, the corps became the 20th Middlesex (Artists’) Rifle Volunteer Corps, with headquarters at Duke’s Road, off Euston Road, London (now The Palace, home of the Contemporary Dance Trust). It formed the 7th Volunteer Battalion of The Rifle Brigade from 1881 until 1891 and the 6th Volunteer Battalion from 1892 to 1908. During this period, The Artists Rifles fought in the Second Boer War as part of the City Imperial Volunteers.

After the 1860s the voluntary recruitment basis of the regiment gradually broadened to include professions other than artistic ones. By 1893 lawyers and architects made up 24% of the unit, doctors followed with 10% and civil engineers 6%. Sculptors and painters totaled about 5%

Following the formation of the Territorial Force, the Artists Rifles was one of 26 volunteer battalions in the London and Middlesex areas that combined to form the new London  Regiment. It became the 28th (County of London) Battalion of The London Regiment on 1 April 1908.

The Artists Rifles was a popular unit for volunteers. It had been increased to twelve companies in 1900 and was formed into three sub-battalions in 1914, and recruitment was eventually restricted by recommendation from existing members of the battalion. It particularly attracted recruits from public schools and universities; on this basis, following the outbreak of the first World War, a number of enlisted members of The Artists Rifles were selected to be officers in other units of the 7th Division.

This exercise was so successful that, early in 1915, selected Artists officers and NCOs were transferred to run a separate Officers Training Corps, in which poet Wilfred Owen trained before posting to the Manchester Regiment; the remainder being retained as a fighting unit. Over fifteen thousand men passed through the battalion during the war, more than ten thousand of them becoming officers. The battalion eventually saw battle in France in 1917 and 1918. Casualties suffered by both members of this battalion and amongst officers who had trained with The Artists Rifles before being posted to other regiments were 2,003 killed, 3,250 wounded, 533 missing and 286 prisoners of war. Members of the Regiment won eight Victoria Crosses (though none did so while serving with the Regiment), fifty-six DSO`s and over a thousand other awards for gallantry.

In the early 1920s, the unit was reconstituted as an infantry regiment within the Territorial Army, as the 28th County of London Regiment. In 1937, this regiment became part of The Prince Consort’s Own Rifle Brigade.

The regiment was not deployed during the Second World War, functioning again as an Officers Training Corps throughout the war.

It was disbanded in 1945, but reformed in The Rifle Brigade in January 1947 and transferred to The Army Air Corps in July as the 21st Special Air Service Regiment (Artists Rifles). The number 21 SAS was chosen to perpetuate two disbanded wartime regiments 1 SAS and 2 SAS, with the 1 and the 2 being reversed into 21. The unit was active during the Malayan Emergency and in many subsequent conflicts. In 1952, members of The Artists Rifles who had been involved in special operations in Malaya formed 22 SAS Regiment, the regular special forcers regiment – the only time a Territorial Army unit has been used to form a unit in the Regular Army.

For much of the Cold War 21 SAS’s role was to provide stay-behind parties in the event of a Warsaw Pact invasion of Western Europe, forming (alongside 23 SAS) I Corps` Corps Patrol Unit.

During Operation Herrick the reservists were involved in the training of the Afghan National Police. Following a review of the unit’s operational capability they were withdrawn from front line operations and the task handed over to a “regular” infantry unit.

During the Cold War, the Reserve SAS Regiments had a clearly defined and understood role but since then, the requirement for them appears to be less clear and more difficult to articulate. A number of reviews have been conducted over the years and included the prospect of a merger or disbandment which was considered to be presentationally unpalatable. A review was conducted of the unit’s operational capability and role in 2009/10, it was found that the SAS Reserve lacked a clearly defined role, and also stated that the reservists lacked the capability, equipment, and skills to serve alongside the regular Special Forces. As an outcome of this review, on 1 September 2014, 21 SAS was placed alongside 23 SAS under the command of 1st Intelligence Surveillance and Reconnaissance Brigade, a brigade under Force Troop Command which provides combat specialist support to the British Army’s Reaction and Adaptable Forces.

The unit’s war memorial in the entrance portico of the Royal Academy at Burlington House commemorates the 2,003 men who gave their lives in the Great War with a second plaque to those who died in World War II.

The following soldiers, who were members of the regiment at one time, were awarded the Victoria Cross in the Great War (none won the VC while serving with the Artists Rifles): 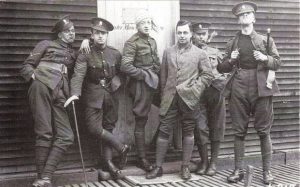 Officers of the Artists Rifles

Patrick Baty (born 1956) is a British Historian of Architectural paint and colour, who works as a consultant in the decoration of Historic buildings.

Brandon Thomas (24th December 1848 – 19th June 1914) was an English actor, playwright and songwriter, best known as the author of the farce Charley`s Aunt

David Wilkie Wynfield (1837–1887) was a British painter and photographer.

Soldiers of the Artists Rifles