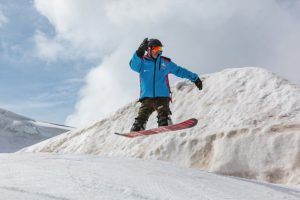 My name is Darren Swift, but everyone knows me as ‘Swifty’. In 1991, after 10 years in the HM Forces, I was injured by a terrorist IED. As a result of the attack, I lost both my legs above the knee. During my recovery and rehab I realised I had a stark decision to make – put my chin on my chest and do nothing or – pick my chin up and crack on with life and whatever maybe in front of me.

Chin up seemed the obvious and only choice and since then I’ve set myself and achieved a huge number of goals. Some of which included travelling around the world taking part and leading expeditions both with teams, such as The 1997 Copper mine River Expedition in the Canadian Arctic, and on solo projects, like Hand-cycling unsupported across Iceland. Others included becoming a Skydiver and receiving a Gold Medal at the 2003 British Skydiving Championships and more recently, focusing on snowboarding.

I’ve also been fortunate enough to join and volunteer with organisations such as Blesma,The Not Forgotten Association, the Royal British Legion and The Soldiers Charity (ABF). Mentoring soldiers from the wounded, injured and sick community to return to an active and fulfilling, albeit slightly different, life has been and still is hugely rewarding.

To compete as a bilateral above knee amputee snowboarder for Great Britain at the 2018 Winter Paralympic Games in Pyeongchang, South Korea. I’m going for podium. It’s a huge challenge, the class is big and there are plenty of very good snowboarders to beat.

From here on in I have my work cut out…

In November 2016 I was successfully ‘categorised’ by the International Paralympic Committee (IPC) for Snowboard Banked Slalom Competition. This is a new event in the Winter Paralympics and at present I’m the only double above knee competitor in this class which includes snowboarders with other lower limb deficiency or disfunction.

I’ve intensive training and international competitions standing between me and the Paralympic podium.

I’m currently training with 4 others who are also aspiring to be Great Britain’s first ever snowboard competitors in it’s next Paralympic team. We’re being supported by some of the leaders in adaptive snowsport in the UK, the Armed Forces Para-Snowsport Team (AFPST) and British Parasnowsport (BPS).

BLESMA continues to support me in everything I do, as they have done since my medical discharge from the Military.

“Blesma, the Limbless Veterans is delighted to support Darren Swift as he continues on his quest to compete in the snowboarding at the 2018 Winter Paralympics in Pyeongchang. Swifty is a true inspiration to all that come to know and see him. His positivity and determination light the way for fellow amputees, disabled people and the possibilities that are open to them. We are behind him all the way on his route to South Korea. 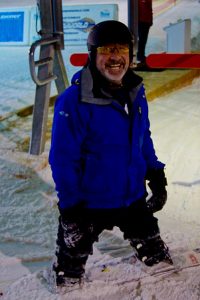 Most people know me as ‘Swifty’ ….not because I’m fast on my feet, my full name is Darren Swift.
I am the first and at the moment the only competing double above knee amputee snowboarder in the world.
I am trying to raise funding for my training and preparations for the 2018 Winter Paralympics in South Korea.
Any funding I can raise through GoFundMe will go towards my costs in this endeavor helping me to afford my travel, accommodation, coaching and equipment.
Training has already begun and my competitions start this season in mid November with the European Championships followed the next day by the Worlds. The rest of the season is given over to training and competitions worldwide and this is repeated again in the ’17-’18 season, after summer training camps, culminating in the Paralympics in March 2018.
I became an amputee in 1991 whilst serving in HM Forces and since then have challenged myself in many different sports and activities often not taking no for an answer when I have been told I wouldn’t be able to do something. Well snowboarding as part of the GB Paralympic Team was one of those things and you will be able to keep up with my progression and ultimately my participation in the 2018 Winter Games through Facebook and Twitter and other media platforms. I have every intention and am determined  to get there, despite the nay sayers, and with your help and support I will.
Many Thanks in advance for your contribution 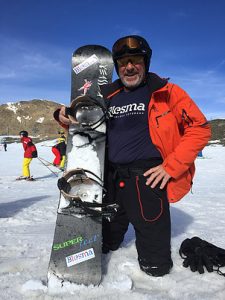 Foot note Memorial at Peninsula Ltd are only promoting Swifty and have no control over any donations given to this cause.

By kind Permission of Darren Smith