The Gurkha’s are the sister regiment of 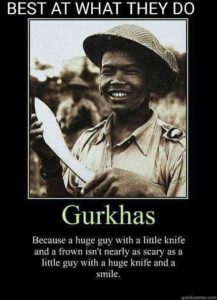 When God first chose a Gurkha

As a vessel of his own,

He took a chunk of cheerfulness

And laid on flesh and bone,

A face, well some deny it,

But a soul that no one could,

For anyone who’s seen it

Wishes his was half as good.

Faith there’s little small about him

Save the question of his size,

From the mountains which begat him

To the laughter in his eyes.

His sport, his love, his courage

Of the simple-minded Hillman

With the manners of a King.

He has given of his thousands

And he hasn’t finished yet,

There’s’ never been a murmur

Of what he himself will get.

That’s not the way he looks at things

But in a simple trend

He heard the “Sahib-Log” call him

So he’s with us to the end.

I have seen him broken, mangled

With his life’s tide running low,

And the tears welled deep within me

As I watched the last thing go;

But it triumphed ere it left him

And stifled every moan,

T’was the little chunk of cheerfulness

Being gathered to its own. 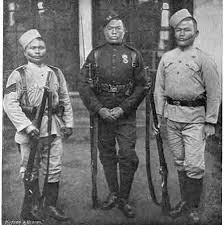 The Brigade of Gurkhas is the collective term for units of the current British Army that are composed of Nepalese soldiers. The brigade, which is 3,640 strong, draws its heritage from Gurkha units that originally served in the British Indian Army prior to Indian independence, and prior to that of the East India Company. The brigade includes infantry, engineer, signal, logistic and training and support units. They are famous for their ever-present kukris, a distinctive heavy knife with a curved blade, and for their reputation of being fierce fighters and brave soldiers. They take their name from the hill town of Gorkha from which the Nepalese Kingdom had expanded. The ranks have always been dominated by four ethnic groups: the Gurungs and Magars from central Nepal; and the Rais and Limbus from the east, who live in hill villages of hill farmers.

Gurkhas and the British Indian Army

During the war in Nepal in the year of 1814, the British failed to annex Nepal as part of the Empire but Army officers were impressed by the tenacity of the Gurkha soldiers and encouraged them to volunteer for the East India Company. Gurkhas served as troops of the East India Company in the Pindaree War of 1817, in Bharatpur, Nepal in 1826, and the First and Second Sikh Wars in 1846 and 1848. During the Sepoy Mutiny in 1857, the Gurkha regiments remained loyal to the British, and became part of the British Indian Army on its formation. The 2nd Gurkha Rifles (The Sirmoor Rifles) and the 60th Rifles famously defended Hindu Rao’s house.

Gurkhas advancing with tanks to clear the Japanese from Imphal-Kohima road
After Indian independence – and partition – in 1947 and under the Tripartite Agreement, six Gurkha regiments joined the post-independence Indian Army. Four Gurkha regiments, the 2nd, 6th, 7th, and 10th Gurkha Rifles, joined the British Army on the 1st if January in 1948.

During the Malayan Emergency in the late 1940s, Gurkhas fought as jungle soldiers as they had done in Burma. The 1/2nd Gurkha Rifles was deployed to Brunei at the outbreak of the Brunei Revolt in 1962.

After that conflict ended, the Gurkhas were transferred to Hong Kong, where they carried out security duties.

The need for such centralized training establishments became apparent following India’s national independence and the Training Depot Brigade of Gurkhas was established on the 15th of August in 1951 at Sungai Petani, Kedah, Malaya.

In 1974 Turkey invaded Cyprus and the 10th Gurkha Rifles was sent to defend the British sovereign base area of Dhekelia.
On the 1st of July 1994 the four rifle regiments were merged into one, the Royal Gurkha Rifles, and the three corps regiments (the Gurkha Military Police having been disbanded in 1965) were reduced to squadron strength. On the 1st of July in 1997, the British government handed Hong Kong over to the People’s Republic of China, which led to the elimination of the local British garrison. Gurkha HQ and recruit training were moved to the UK.

Gurkhas undergoing an urban warfare exercise in the United States. Note the kukri on the webbing of the nearest soldier.
The Royal Gurkha Rifles took part in operations in Kosovo in 1999, in UN peacekeeping operations in East Timor in 2000 and in Sierra Leone later that year.

In 2007 the Brigade of Gurkhas announced that women were allowed to join. Like their British counterparts, Gurkha women are eligible to join the Engineers, Logistics Corps, Signals and brigade band, although not infantry units.
In September 2008 the High Court in London ruled that the British Government must issue clear guidance on the criteria against which Gurkhas may be considered for settlement rights in the UK. On the 21st of May 2009, and following a lengthy campaign by Gurkha veterans, the British Home Secretary Jacqui Smith announced that all Gurkha veterans who had served four years or more in the British Army before 1997 would be allowed to settle in Britain.

The selection process for the Gurkhas is very demanding: there are typically 25,000 applicants a year for just 200 places.

Brigade HQ is based at Trenchard Lines, Upavon, Wiltshire. The two battalions of the Royal Gurkha Rifles are formed as light role infantry; they are not equipped with either armoured or wheeled vehicles. One battalion is based at Shorncliffe Army Camp, near Folkestone in Kent as part of 52 Infantry Brigade, and is available for deployment to most areas in Europe and Africa. The other is based at the British garrison in Brunei as part of Britain’s commitment to maintaining a military presence in SE Asia.

A monument to the Gurkha Soldier near the Ministry of Defence in London
Main article: Gurkha Memorial, London
The British memorial to the Gurkhas was unveiled by Queen Elizabeth II on the 3rd of December 1997. The inscription is a quotation from Sir Ralph Turner, a former officer in the 3rd Gurkha Rifles.

A monument to the Gurkha Soldier near the Ministry of Defence in London
Main article: Gurkha Memorial, London
The British memorial to the Gurkhas was unveiled by Queen Elizabeth II on 3 December 1997. The inscription is a quotation from Sir Ralph Turner, a former officer in the 3rd Gurkha Rifles.

Gurkhas are also recruited by the British Army for the over 2,000 strong Gurkha Contingent of the Singapore Police Force. Approximately 2,000 Gurkhas also serve in a similar role in the Gurkha Reserve Unit in Brunei

In addition to the British Army, Gurkhas are also recruited by the Indian Army (approximately 100,000 in 44 battalions plus 25 battalions of Assam Rifles), as part of the tripartite agreement that was signed at the time of India’s independence. This is further documented in a list of Gurkha regiments serving under the Indian Army.

Under international law, according to Protocol 1 Additions to the Geneva Conventions of 1949, Gurkhas serving as regular uniformed soldiers are not mercenaries, According to Cabinet Office official histories (Official History of the Falkland Islands, Sir Lawrence Freedman), Sir John Nott, as Secretary of State for Defence, expressed the British Government’s concern that the Gurkhas could not be sent with the task force to recapture the Falkland Islands because it might upset the non-aligned members of the fragile coalition of support that the British had built in the United Nations. The then Chief of Defence Staff Sir Edwin Bramall, like Nott a former officer in the 2nd Gurkhas, said that the Gurkhas were needed for sound military reasons (as a constituent part of 5th Infantry Brigade) and if they were not deployed then there would always be a political reason not to deploy Gurkhas in future conflicts. So he requested that Nott argue the case in Government for deploying them against the advice of the Foreign Office. Nott agreed to do so commenting that the Gurkhas “would be mortified if we spoilt their chances of going”.

The Gurkha Museum is in the former Peninsula Barracks, Winchester