A Report from Sky News

Read the full report and watch the DVD below Royal Green Jackets in Northern Ireland Part 2.

One member of the undercover team  talks about the incident that earned him the Military Medal for his part in the shooting of two IRA gunmen.

In his own admission no warning was given to the two men.

The Bryson Incident: A Misbelief Corrected, An Insight Into Early IRA Cells

In the original manuscript about the demise of James Bryson, which was written by Ed Maloney and James Kinchin-White it was illustrated with a photograph of a vehicle which was purported to be the vehicle that James Bryson met his death in.

In fact this vehicle was not the said vehicle that James Bryson met his demise in, the vehicle shown in the original document written by the two authors Ed Maloney and James Kinchin-White was in fact unrelated to the death of James Bryson, this vehicle had one year earlier been involved in another shooting.

The vehicle which James Bryson met his demise in was another vehicle, which is only known to the intelligence officers of the British Armed Forces.

The day’s events have a few unanswered questions they are:

How was it that James Bryson had been seen earlier in the estate driving around purported to waving a weapon around, there was intelligence to say this and therefore he was in the radar and was heading towards a rendezvous point, the question is why if the intelligence knew that Bryson was heading towards this area, were two soldiers left in a roof space as sitting ducks?

Two soldiers that should have been on patrol in a formation of more than two soldiers where were the others?

Why were they not sent back up?

Was Bryson working for the intelligence services undercover?

Was his waving of the weapon previously in a residential area an action made to flush out the security forces or was it too show a signal of strength to let other terrorists know he was there or to strike fear in innocent people, both would make sense if he was working for the security forces as has been suggested previously?

Was Bryson going to the final destination under the lull of a sense of false security, he thought he was going with his intelligence officers, others who were working for the armed forces as IRA officers, in the car and his IRA companion unaware that they were going to a rendezvous which would be the capture of his IRA colleague, hence Bryson did not fire at the two soldiers that were sitting as sitting ducks when they kicked the roof space in?

The Soldier who opened fire, was it his bullet that killed Bryson, where is the postmortem report to show this?

Did somebody in the car sacrifice Bryson; was he shot in the car?

In fact was this a two for one exercise gets rid of a rogue intelligence officer and an IRA terrorist at the same time?

How many occupants were in the car?

Where is the car?

Did the car scream off as was stated by a resident nearby?

What happened to the other occupants?

Were Bryson and his colleague thrown out of the car?

Where are Bryson’s’ bullets, surely he would have returned fire, If he didn’t then was he actually being aggressive, showing aggression with his weapon?

Was this the reason for the Soldier to fire at him?

If no firing was taking place at the time, how come a Soldier fired on Bryson?

Was this a pre organized exercise?

Bryson and his colleague were they shot in the car and to legitimize the incident the Soldier knew he had to put a round down, to cover the tracks of the intelligence officers that had killed Bryson?

How many bullets were in Bryson did they all match the British Soldiers ammunition?

Did the Soldier get the Military Medal as a hush award, to keep his mouth shut a pay off?

All of the above have been circulated unanswered for 45 years.

Of course given the nature of the incident, it is safe to say that the Dead tell no lies, and the answers have died with the x-rays. (X-ray a term used for the dead terrorist in Army speak / Military speak).

He who does not bellow the truth when he knows the truth makes himself the accomplice of liars and forgers.” Charles Peguy.

To sin by silence when we should protest makes cowards out of men – Ella Wheeler.

Published in a RGJ Chronicle 1974 issue 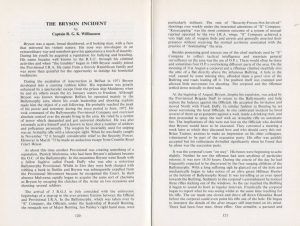 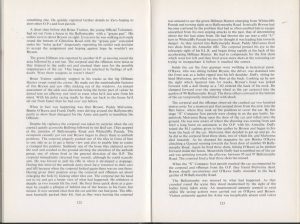 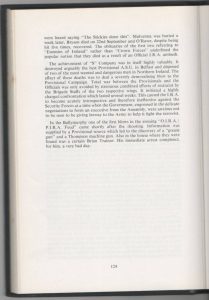 This Chronicle is or was on sale in The RGJ / Rifles Museum.