Home » Articles » ” The Regiment and its’ association say, THANK YOU.”

” The Regiment and its’ association say, THANK YOU.” 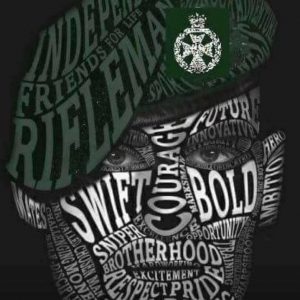 Memorial at Peninsula Limited has 2 Directors and one Secretary who acknowledge this thanks. 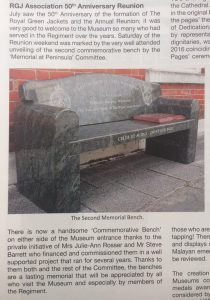 The Original Tribute Chair Above 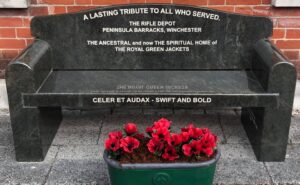 A LASTING TRIBUTE TO ALL WHO SERVED.

The Ancestral Home of The Royal Green Jackets

Julie-Ann’s Speech at the unveiling of The Tribute Chair Saturday 9th July 2016.

A LASTING TRIBUTE TO ALL WHO SERVED.

Julie-Ann’s Speech at the unveiling of The Tribute Chair Saturday 9th July 2016.

Welcome my Lords, Ladies and Gentlemen and honoured Guests, Rifleman and the family of green; four years ago my colleague Steve Barrett and I launched a fund raising objective to pay tribute and memoriam, at this Ancestral home, of our great Regiment and acknowledge it`s lineage from where many traditions have been bought forward to today’s Infantry.

The Regiment has seen many changes and bought forward many characters and life changing events, freeing many from oppression, worldwide in a hearts and minds offensive.
The hill upon high is getting very full with men young and old, Soldiers who were proud to be Swift and Bold, at today’s events I ask you to remember their achievements too.

This year has had so many poignant anniversaries, this is the 90th year of our Sovereign who was Colonel in Chief of our Regiment, she too has been watching this project unfold, and other Anniversaries have been commemorated this year, such as the 76th Anniversary of Calais and the D Day Landings and Waterloo last year, and now the 50th anniversary of The Royal Green Jackets at their reunions, this is indeed a Golden Anniversary year.

The Green Jacket Brigade 1958 to 1966 and latterly, The Royal Green Jackets from 1966 to 2007, have always made their mark Worldwide, and on home turf; remembered for their Swift marching pace and the ability to forge good relationships within the community. In 137 postings the Regiment has made many lasting community relationships.
You could say the Regiment is a good example of, The Military Covenant.

During the fund raising objective we have had many wishing us well, the late General Wallace being one of them, sadly he with some others, never saw this project finalised, but I would like to posthumously thank him and the others for their support; they have the best seat in the Barracks today, to survey us all.

I should like Philip Mason to read one of His poems.

Philip we will be honoured if you would read your poem please.
Read by Philip Mason (author)

I want to be a Green Jacket.

“I want to be a Green Jacket;

I want to stand so proud

I want to March at a PACE

That others aren’t allowed!

I want to wear the rifle Green

To stand in the woods

And not be seen

My trusted SLR by my side

Ready and waiting to kill with pride

Proud to say that I was in it.

A Green Jacket I am

For that’s what life chose for me

From then to this day.”

I should like to invite Jason Salkey to read a poem by, Rifleman Philip Pickford who is away filming today.

Jason it would be an honour if you would read Philips poem to us please .
The poem is The Chairs.

“In memory of all Riflemen.

Who have passed through Peninsula Barracks
And called It “Home”.

“The Chairs”
(To sit and think a bit)

A memorial to stand so proud,
To catch the eye of the passing crowd.

Take a rest have a seat,
See who passes, who you meet.

And while you sit in the cool day air,
Think about these stone carved chairs.

To some it’s just a piece of stone,
To others, a symbol that this was once, their home.

And when you leave here, And Leave you must.

Remember those Riflemen, who now are Dust,
R.I.P
By fellow Rifleman

After the unveiling there will be a wreath laying at the Memorial Chair, in order that we can remember at home, those that have gone to The Hill upon High.

I will be asking General Balfour, Simon Booth Mason and Chelsea Pensioner Joe Shortall along with Philip Mason to accompany Jason at the Memorial Chair, as Jason lays the wreath.

I wish to thank all of you for attending today, I thank the Buglers under the direction of Anthony Bishop and Ken Cox our photographer, and Simon Booth Mason, General Balfour for support and endorsement today, and the residents and museum for allowing us to honour our Ancestral Home, and those that made it great, you Riflemen are the history makers, this is your history, Own It.

There are some separate thank you’s too, there is No I in team so with that in mind I wish to thank Steve Barrett and our Sponsors.
It’s been an uphill battle but a battle worth while, a team effort.

A special thanks to our honoured guest Jason Salkey, aka Rifleman Harris who has successfully replicated our History through the series Sharpe, and has honoured us today by being with us, also a thanks to Philip Mason.

It gives me great pleasure to respond on behalf of The Royal Green Jackets Association on the amazing work that Steve and Julie have produced before us, this was our home for 127 years and for 20 years Green Jackets cap badges passed through these buildings, transformed as if it where Versaille, didn’t remember it in my day being that, since 1985 it is our spiritual home with our museum behind us and Regimental Head Quarters in that building over there, this continues to represent Green Jacket matters, as well as obviously running our successor Regiment of The Rifles, so its hugely appropriate and fitting that these two memorial benches placed here to remember the service of so many generations of Green Jackets who came through this depot, who suffered good days and bad as Rifleman. I would like to finish by saying what a personal pleasure it is that Julie Ann and Steve for running this project, both are 3 RGJ connected, Steve, i think was in my company, Julie Anns’ husband was my driver when i was commanding officer. The work they have gone through has not been without its ups and downs but they have persevered, and it is a tribute to those two, and I would like you all, together, to show our appreciation for their work. (Round of Applause by fellow Riflemen).

Jason cuts the ribbon and Philip and Jason remove the flag to unveil The Tribute Chair.

Now I ask the unveiling team to accompany Jason at the Memorial Chair for the wreath laying. ( Jason was accompanied by, General Balfour, Simon Booth Mason, Joe Shortall and Philip Mason)

Wreath laying by Jason Salkey and a salute.
Last post
One minute silence
Reveille and No More Parades.